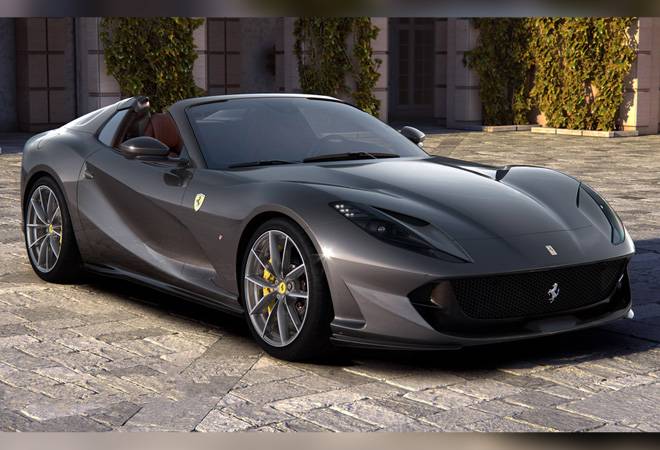 Ferrari revealed on Monday its two new releases as the Italian premium automaker pursues an aggressive roll-out of new models to sustain its turbo-charged core earnings and share price growth.

The F8 Spider and 812 GTS - unveiled at an event for customers and fans in Ferrari's historic base in Maranello, near Modena, northern Italy - will add a high-performance sports car and an easier-driving grand tourer (GT) vehicle to its stable of luxury road cars.

"It is less extreme than the 488 Pista Spider, but sportier than the 488 Spider which it replaces in the range," Ferrari said in a statement.

The 812 GTS marks the "return for a model type that has played a pivotal role in the marque's history since its foundation," Ferrari said in a separate statement.

Although a GT, it displays a massive 800-horse power front-mounted 12-cylinder engine, making it the most powerful production convertible on the market, Ferrari claims.

Ferrari Chief Executive Louis Camilleri has promised to launch 15 new models between 2019 and 2022, and achieve a significant increase in average retail price.

The average sales price for a Ferrari stood at around 274,000 euros ($303,000) last year, including spare parts, a calculation based on financial data from the company shows.

One more launch is expected by the end of the year to take the total to five in 2019, including the F90 Stradale, Ferrari's first hybrid car to be widely produced.

Ferrari has also promised several special edition hybrid cars and a utility vehicle, the Purosangue, which is expected by late 2022 as it seeks to almost double core earnings and boost margins to above 38% without sacrificing exclusivity.

Chairman John Elkann hinted last month that the last release of 2019 could be another GT, more comfortable to drive on long journeys.

GTs from the 1960s, some with seating for four people, are among the most popular at auctions and enthusiast events and Ferrari has said previously that about 40% of its total sales could come from GT cars by 2022, up from 32% now.

Elkann, however, said that Ferrari - which shipped fewer than 10,000 cars last year - would not try to chase German rival Porsche which has expanded its sales volumes to more than 250,000 sports cars and SUVs annually.

The 'Cavallino Rampante', or 'Prancing Horse', known for its racing pedigree and roaring combustion engines, wants 60% of its cars sold by 2022 to be hybrids. Ferrari is also considering a full-electric model, but that will not hit the road before 2023.

After five new models in 2019, Ferrari is set to slow down the roll-out of new vehicles in the coming years.

Mediobanca analyst Andrea Balloni predicts more moderate growth in Ferrari car deliveries after a 10.2% increase in 2018 with a high single-digit figure expected in 2019.

"The real challenge for Ferrari is how far it will be able to push price increases in the coming years".

Ferrari does not change the selling price during a model's life-cycle, normally four to five years. Prices increase only through the introduction of new models, which, in Ferrari's philosophy, always mean better performance than previous ones.

"We are managing our waiting lists in a very judicious and very careful manner to ensure that we will retain our pricing power for the long term and that's very, very important," CEO Camilleri told an analyst call last month.

"We believe Ferrari's strong pricing power should drive higher average sales prices and in turn support an increase in margins across its model launches," they said in a report, adding that it would continue to return capital to shareholders.

This might provide further support to Ferrari shares, which have more than tripled in value since they were listed in Milan in January 2016.