The new Chevy Suburban will grow by 1.3 inches to 225.7 inches long - making it one of the longest passenger vehicles on the market 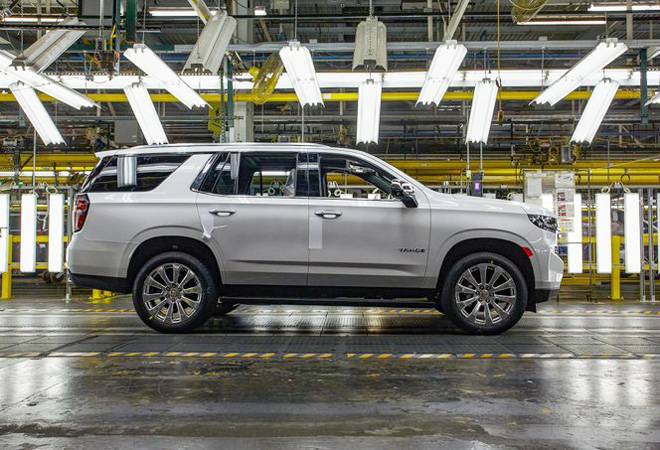 The 2021 Chevrolet Tahoe is 6.7 inches longer than the current Tahoe and can carry as much as 122.9 cubic feet of cargo.

GM, which controls about 70 percent of the large SUV market in North America with six models, unveiled the redesigned Chevrolet Tahoe and Suburban. These are the first of a new generation of large SUVs whose profits will help fund the development of electric vehicles (EVs) from the automaker in the future.

The 2021 Chevrolet Tahoe, revealed at the arena where the Detroit Red Wings hockey team plays in downtown Detroit, is 6.7 inches longer than the current Tahoe and can carry as much as 122.9 cubic feet of cargo. Passengers in the third row of seats get 10 inches more legroom and a better ride thanks to a more car-like independent rear suspension.

The new Chevy Suburban will grow by 1.3 inches to 225.7 inches long - making it one of the longest passenger vehicles on the market. GM's big SUVs will be powered by eight-cylinder gasoline engines or six-cylinder diesel motors.

"It is huge," Reuss said of the potential to sell customers new digital functions or avoid warranty repairs with a software update. Electric car maker Tesla Inc has used over-the-air upgrades as money makers and to fix problems at low cost.

"As the industry moves toward EVs, profits from large SUVs will help pay for investments," Reuss said. Those include GM's plans to build a new battery plant and offer an electric pick-up truck.

The new SUVs are assembled at a complex in Arlington, Texas, a state where many of them will be sold. GM has invested $1.4 billion (1.09 billion pounds) to expand the Arlington operation, and that gives the company the option to manufacture additional models, Reuss said.

"We do not want to invest that much..and not have agility," he said.

The Tahoe and Suburban unveilings cap a substantial investment by GM over the past five years in its largest pickup trucks and SUVs. GM's Detroit rivals, Ford Motor Co and Fiat Chrysler Automobiles NV, are also expanding their large SUV lineups, even as they promise more electrified cars for the future.

Detroit automakers are doubling down again on big SUVs for a simple reason: It pays.

The Arlington, Texas factory is running 24 hours a day to meet demand, and profit margins on large SUVs can be as high as 30 percent, or more than $15,000 a vehicle, industry executives and analysts said. Barclays estimated large pickup trucks and SUVs accounted for 72 percent of GM's North American profit in 2018.

GM did not disclose pricing or fuel consumption data on the new SUVs, but the average Tahoe sold for $57,414 in November, according to data from ALG, a unit of TrueCar.

US fuel economy rules, instituted under President Barack Obama, encourage automakers to make SUVs even bigger. Vehicles that have larger "footprint" because they are long and wide have easier mileage and CO2 emissions targets to meet.

President Donald Trump has said he wants to ease vehicle CO2 standards but has not released a final plan. GM has sided with Trump on fuel economy policy in a dispute with California, which has sued to maintain the stronger Obama era standards.

GM's sales of big utilities through the end of November were roughly steady year over year, according to sales figures from Automotive News.

But GM faces tougher competition in the segment going forward. Ford has boosted sales of its competing Ford Expedition and Lincoln Navigator large utilities by 45 percent through November 30. Fiat Chrysler Automobiles NV plans to launch a new Grand Wagoneer in 2021.