Soon, cars could be graded for fuel efficiency

The Prime Minister's Office has approved a new set of standards for the automobile industry and car manufacturers and is planning to grade your car on the basis of its fuel efficiency.

Move over five-star airconditioners and refrigerators. The government is planning to grade your car on the basis of its fuel efficiency.

The Prime Minister's Office (PMO) has approved a new set of standards for the automobile industry and car manufacturers to ensure that every car delivers more per drop of fuel.

If what the proposed standards claim translates into reality, the fuel efficiency of your car would improve by 20 to 25 per cent, particularly in the "lighter weight category". In a country obsessed with mileage, the norms promise high savings for car buyers.

Once they are implemented, fuel saving, both in terms of quantity and money, would be humongous.

MUST READ:10 tips to improve your car's mileage

A top government officer said: "It would be mandatory for the automobile industry and manufacturers to ensure stipulated fuel efficiency mark as per the weight and design categories framed under the new standards. The move would push the fuel efficiency of the vehicles by 20-25 per cent, but that would be made possible in two phases - 2015 and by 2020."

For the buyers, the fuel efficiency would be graded in stars.

A senior road and transport ministry official said: "The Bureau of Energy Efficiency (which is authorised to notify the standards) has proposed to do a star-based labelling reflecting the efficiency levels, similar to power-saving electronic gadgets. Under this, car models will be ranked according to one to five stars based on their fuel efficiency. This is expected to influence the consumers' choice."

The top 10 car manufacturers with combined sales of over 96 per cent of the Indian market have an average fuel efficiency of 16.42 km per litre at present.

This average is calculated on the basis of the mileage claimed by the manufactures for all categories of cars, small and big, rolled out by them annually. By 2015, the average is targeted to go up to 18.15 km per litre. By 2020, this is proposed to improve to 20.79 km per litre.

The new standards are being set as corporate average fuel consumption (CAFC) standards.

The final target for each manufacturer and the industry as a whole would be calculated on the basis of the average fuel economy of all the cars sold by them. 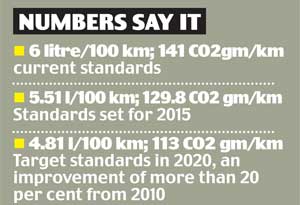 "At present, Indian cars on an average are consuming about 6 litres per 100 km. The current official proposal for the standard is to improve this to 5.1 litres per 100 km by 2020, almost a litre less per 100 km. In smaller weight categories, the margin would be bigger," Anumita Roychowdhury, associate director, Centre for Science and Environment (CSE), said.

But the road ahead is not as smooth.

The automobile industry and manufacturers are not too positive about delivering on the proposed standards. They claim "the targets are too unrealistic to achieve and achieving higher fuel efficiency would be a trade-off with cost and safety". Society of Indian Automobile Manufacturers (SIAM), an apex body of the industry, is in no mood to oblige.

"No way it can be done... The government should not push us to achieve unrealistic targets as we won't be able to deliver on the proposed standards," SIAM director general Vishnu Mathur said.

"It would require a lot of investments in research and development (R&D) and in that the Indian companies would not be able to compete with the foreign car manufacturers, say from Europe and Japan. They have huge investment scale for R&D, unlike the Indian market," said Mathur.

MUST READ:Top tips for travelling by car during summers

The new standards await notification from the Bureau of Energy Efficiency (BEE). Subsequently, it would be the sole responsibility of the road and transport ministry to execute the notified standards.

It is learnt that the PMO has sent the standards to BEE, asking it to build a consensus among the stakeholders, including the ministry of heavy industries and the automobile sector, and subsequently forward it to road and transport ministry for final execution.

The campaign to bring in the fuel standards in India on a par with the European Union has been hanging fire for three years.

The CSE has been at the forefront of this campaign, pursuing it with the ministries concerned and the automobile industry to bring in the standards in the research and design sectors of the various car models.

"This is needed at a time when fuel prices are soaring, oil imports are increasing and the Indian economy is reeling under crippling prices of oil imports," Roychowdhury said.

But even by these standards, if achieved, India would stand at the bottom of top car manufacturing hubs. The European Union will lead, followed by Japan in achieving higher fuel efficiency levels.

Toyota's Sandeep Singh said: "We are aware of the guidelines and the industry is in talks with SIAM and the government to arrive at the best possible option to improve fuel efficiency." According to Mathur, targeting too high efficiency levels would also be a trade-off with cost and safety.

"The higher you aim to achieve the efficiency, the lighter the vehicle has to be, asking the industry to go in for changes in spares and body shield. It can be changed from aluminum to magnesium...more plastics can be used. But that involves huge cost," he said.

Most importantly, the car cost would escalate, says a senior industry representative. "It would also bring in the pressure for tighter regulations and routine monitoring from the government.

Do we have the capacity at a time when we still miss out on facilities for safety and crash tests," he asked.