"We are not aggressively scouting for one at the moment but if some target comes on the way, we will surely look at it," Hero MotoCorp Managing Director and CEO Pawan Munjal said. 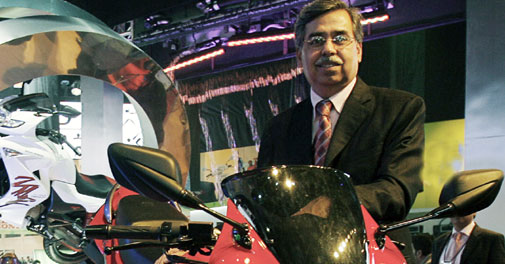 After stringing up a series of technology partnerships, Hero MotoCorp says it is open to acquiring companies, including full-fledged two-wheeler makers, as part of global expansion strategy.

"We have not stopped efforts to find technology partners, it is an ongoing process. We are open to acquiring companies," Hero MotoCorp Managing Director and CEO Pawan Munjal said .

"We are not aggressively scouting for one at the moment but if some target comes on the way, we will surely look at it," he added.

While Munjal did not specify what kind of company would interest Hero MotoCorp, he said it was about adding value to the company's pursuit of technological prowess. "Money is not an issue, it is about putting it to good use."

Currently, Hero MotoCorp has cash reserves of about Rs 3,500 crore.

In July, the company had picked up 49.2 per cent stake in US-based Erik Buell Racing (EBR) for $25 million, after entering into a technology sourcing pact last year.

It had entered into an alliance with Austria-based engine developer AVL to enhance capability in various segments last year, apart from roping in Italian two-wheeler design firm Engines Engineering as a partner to help develop next-generation product line-up.

Hero MotoCorp has also been strengthening its R&D set-up after the Indian promoter of the two-wheeler maker, the BM Munjal family, agreed to buy out the entire 26 per cent stake of Honda in their erstwhile joint venture Hero Honda for Rs 3,841.83 crore in December 2010.

Having embarked on a solo journey, Hero MotoCorp has set ambitious targets, looking to expand in global markets.

In August this year, it had announced plans to enter 50 new markets by 2020 with a target of 20 manufacturing facilities across the globe and an overall annual turnover of Rs 60,000 crore.

Hero MotoCorp in July announced its foray into the African continent with the launch of its brand and products in Kenya where it has also set up an assembly unit. A month later, it entered Peru with the launch of the 'Hero' brand and its range of two-wheelers in the Latin American nation.

SC notice to Centre, CBI and RIL on gas controversy