India's fastest growing automobile and sports-utility vehicles segment got the maximum relief in the Budget. From an earlier 30 per cent, the excise duty  on SUVs has been brought down to 24 per cent. Hatchback and sedan buyers will also benefit. After a year of muted sales, there may be a sales burst ahead for the automobile industry. All the major car companies have announced reduction in the prices of their models up to a maximum of six per cent after the Interim Budget on Monday, in which Finance Minister P. Chidambaram reduced the excise duty on passenger cars, sports-utility vehicles and two wheelers. This could translate into increased buying.

India's fastest growing automobile segment, sports-utility vehicles got the maximum relief in the Budget. From an earlier 30 per cent, the excise duty  on SUVs has been brought down to 24 per cent. 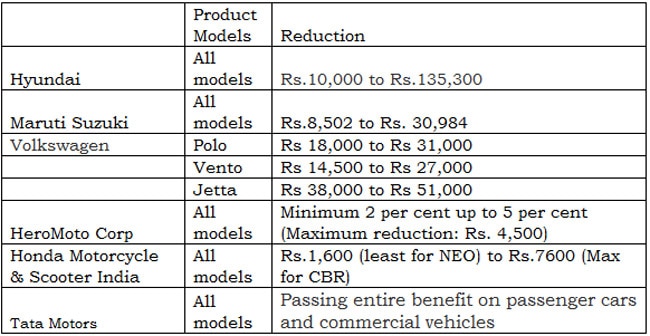 Two-wheeler buyers have also benefited from the interim Budget. HeroMoto Corp, India's largest two-wheeler maker announced price reduction of two to five per cent, the maximum being Rs 4,500. Its one time partner, Honda Motorcycle and Scooters, however,  was the first to announce a price cut of Rs 1,600 cut on the Dream Neo (110 cc bike) and a maximum of Rs 7,600 on the CBR.

Maruti, Hyundai cars too get cheaper after excise duty cut