Mahindra XUV is the third Indian car to get the highest safety rating after Tata Nexon last year and Altroz last week. Here's what this means 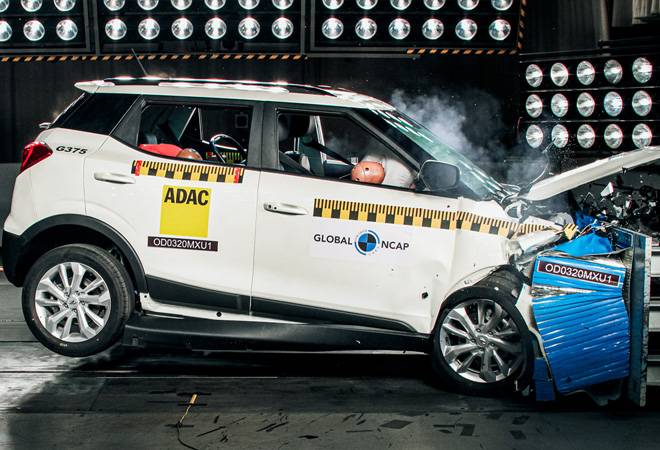 Homegrown automaker Mahindra and Mahindra's compact SUV XUV3OO has scored 5 stars for adult occupant safety in crash test conducted by UK based independent body Global NCAP. XUV3OO is only the third car in India to get the highest safety rating after Tata's Nexon last year and Altroz last week.

Based on Mahindra's South Korean subsidiary Ssangyong's Tivoli platform, the XUV3OO was launched in India in February last year and comes with dual airbags as a standard feature. Other safety features like ESC and side-impact airbags are offered as options. Global NCAP tested the version without these features.

It also scored four stars for child occupant safety-Nexon and Altroz had both scored three stars in this and with an overall score of 16.42 out of a maximum 17 in adult protection and 37.44 out of a maximum 49 in child safety, it has the highest combined crash test score for any Indian vehicle tested so far.

"Mahindra is the second Indian manufacturer to achieve Global NCAP's coveted five star status and the XUV300 scores the highest combined crash test result of all the cars we've tested in India to date," said David Ward, CEO and President, Global NCAP. "We are delighted with this hugely positive outcome in our #SaferCarsForIndia campaign. It's a vitally important win for Indian consumers and sets a safety challenge that every manufacturer must now be measured against."

Global NCAP first grabbed headlines in India on the eve of the biennial Delhi motor show in January 2014 when it tested five Indian cars. All of them -- Tata Nano, Maruti Alto 800, Hyundai i10, Ford Figo and Volkswagen Polo, fared miserably and scored a zero. Since then it has given heartburn to Indian car companies on numerous occasions.

I can't think of any better news to receive right as I get to Davos. World class: we can't set our sights any lower... https://t.co/6PeXqyWiWx

Ten months later, Datsun Go and Maruti Swift could not muster the pass marks. In 2016, the base variants of the Kwid, Hyundai Eon, Maruti Celerio, Eeco, Honda Mobilio, Tata Zest and Mahindra Scorpio, all scored zero stars as well. Testing in subsequent years expanded the list of zero-star rated cars in India further to include the Renault Duster and Chevrolet Enjoy in the list.

So far more than 35 cars across 26 brands have been crash tested in India. The overall results are far from flattering. An overwhelming 19 cars have scored zero stars, two have scored 1 star, three cars scored 2 stars, 4 cars have 3 stars and 6 have scored 4 stars. The Tata Nexon compact SUV, the Altroz premium hatchback that will be launched in India on Wednesday and now the XUV3OO are the only three cars to have scored the maximum 5 stars till date in India.

"In the space of just a few years Global NCAP's #SaferCarsForIndia campaign has transformed both the public conversation and public policy on vehicle safety in India. Indian car makers are stepping up and taking responsibility for protecting their customers," said Saul Billingsley, Executive Director, FIA Foundation. "This result from Mahindra proves that five star vehicle safety is possible and affordable, and we now expect all manufacturers to offer Indian consumers five star protection, as standard."

In recent times, there has been an increasing awareness towards safety both among manufacturers as well as consumers. Unlike before, most of the cars being sold in India today come with features like dual airbags and ABS as standard. This is reflected in the relatively better scores that Indian cars have got in recent tests conducted by Global NCAP.