Maruti Suzuki India Ltd is betting big on its new compact model Celerio with automatic gear shift to take on arch-rivals Hyundai's Grand i10 and Honda Brio. The new compact car, scheduled for launch on Feb 6, is expected to be aggressively priced to attract customers. 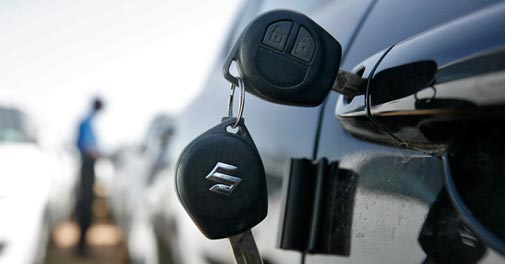 Market leader Maruti Suzuki India Ltd ( MSIL) is betting big on its new compact model Celerio with automatic gear shift to take on arch-rivals Hyundai's Grand i10 and Honda Brio. The new compact car, scheduled for launch on February 6, is expected to be aggressively priced to attract customers in the price- sensitive market.

According to MSIL, Celerio, with a fuel efficiency of 23.1 km per litre, will be offered in six petrol variants- four with manual transmission and two with automatic gear shift.

The car comes loaded with several features like alloy wheels and Bluetooth connectivity across variants. Celerio, which sports 1- litre K- next engine, would be available in seven colours.

ALSO READ:How Maruti bounced back after its labour strife of 2012
Celerio auto gear shift variants will have the flexibility of both manual mode and auto drive mode in the same car with a mere shift of the gear lever. While such a facility exists in premium sedan models, this is the first time that a compact model will be offering the option.

With Celerio, which has been developed at an investment of around Rs  570 crore, having our EZDrive technology, we have addressed those issues." While Pareek did not elaborate on how much the Celerio with automatic gear shift will cost, he said that the difference in price with a manual transmission will not be significant.

Currently, an automatic transmission (AT) version of a car in the domestic market is priced around Rs  1 lakh higher than the manual transmission version, Pareek added.

The Grandi10 and Brio have automatic transmission versions priced at Rs  6.04 lakh and Rs  6.19 lakh respectively ( ex- showroom, Delhi). Both the cars are selling well in the niche compact car segment and MSIL is eyeing a share of this market pie. Maruti has already started taking bookings for the car although prices will be announced only at the time of launch.

In the past, MSIL launched AT version of its compact cars, including the Zen and A- Star, but their high prices turned out to be a deterrent for customers.