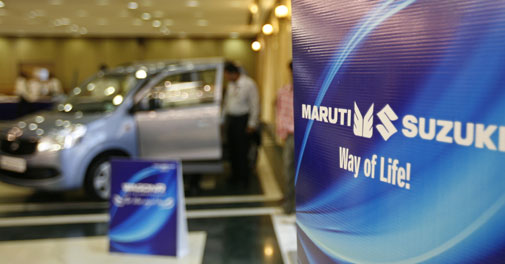 Maruti Suzuki India, the country's largest car-maker, has posted a 35.87 per cent increase in net profit to Rs 681.15 crore for the third quarter ended December 31.

The company had posted a profit of Rs 501.29 crore in the corresponding period of the previous financial year.

FROM THE MAGAZINE:How Maruti bounced back after its labour strife of 2012

The company's board has decided that the investment in the Gujarat facility will be made by a 100 per cent Suzuki subsidiary and not Maruti Suzuki. "The company will be named Suzuki Motor Gujarat Pvt Ltd with a starting capital of Rs 100 crore," Suzuki Motor Corporation Chairman Osamu Suzuki said.

FROM THE MAGAZINE:Can Maruti fight a global player in the long term?

The company will not be listed and will be set up by April.

Maruti Suzuki shares fell 2.78 per cent to Rs 1,654 on the Bombay Stock Exchange.