Ignis being tested for frontal offset at MSIL Rohtak Facility

Maruti Suzuki is gearing up to meet the new crash standards India will be migrating to in the next few months. Five models -- S-Cross, Ciaz, Baleno, Ertiga and the latest Ignis -- are already crash compliant and all new cars to be launched from October onwards will adhere to the new norms.

Its Vitara Brezza and Ignis models were tested and evaluated at the crash labs in the company's sprawling 600 acres Research & Development Centre at Rohtak in Haryana. At its launch in January 2017, all variants of Ignis were officially declared to meet all advanced safety norms on offset, side impact and pedestrian safety. 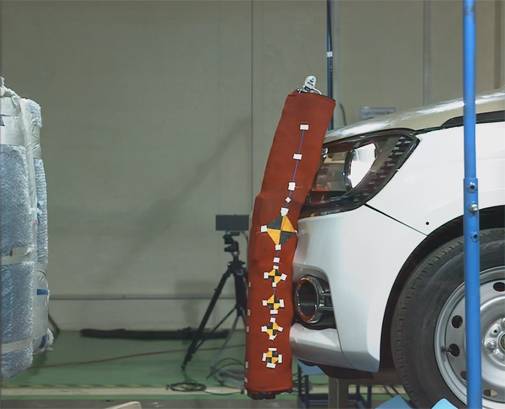 Ignis being tested for pedestrian safety at MSIL Rohtak facility

"To meet the advanced safety regulations, each of these vehicles has undergone 35-40 tests during design and development over three-four years. Clearly, the state-of-the-art crash lab facilities and proving ground at Rohtak, together with the capability of its engineers, have enabled Maruti Suzuki to meet advanced safety regulations in these five models, ahead of schedule," says R&D head, C.V. Raman.

About 75-80 per cent cars in the Maruti Suzuki portfolio would become compliant with these norms about a year ahead of them becoming mandatory in India.

Maruti Suzuki's centre at Rohtak, with a total project investment of Rs 3,800 crore, is the second advanced R&D facility in India. Tata Motors' has a crash labs and allied facilities in Pune.

Maruti controls almost 50 per cent of the market and has invested a cumulative Rs 3800 crore (the integrated facility will be fully developed by 2019), to build 31 unique test tracks that traverse over 31 km replicating real life terrains and can race vehicles up to 190 km/hr. This facility enabled Maruti Suzuki to design, develop and evaluate its Vitara Brezza compact SUV, with some core help from Suzuki's engine and technology expertise. "We are pursuing the objective of developing safer cars ahead of regulations.

India has highest motoring fatalities in the world and 17 per cent of those are related to passenger vehicles. We will be trying hard to conceptualise and design vehicles for safer motoring and minimise passenger injuries," added Raman.

Over the last decade, Maruti Suzuki has systematically trained and developed engineers for R&D by giving them exposure to new model development, as well as doing special projects, with the parent Suzuki Motor Corporation's design and technology unit in Japan.

Nearly 35 per cent of Maruti Suzuki's 1400 R&D engineers have already been trained at Suzuki for up to two years to acquire the competence needed to create top-of-the-line vehicles with advanced features and high quality and safety.

The first success for its engineers was the facelift given to the compact car Zen in 2003, followed by co-design of Swift with the Suzuki global R&D team in 2005 and working on the full body change of Alto in 2012.

Over the years, Maruti Suzuki's engineers have shown their skill in various models and technologies, leading up to the compact SUV Vitara Brezza in 2016.