Mercedes Benz V Class Elite is powered by a new BS-VI compliant 2.0-litre diesel engine, tuned to make around 161 bhp and 380 Nm of peak torque. It gets a 9G-Tronic 9-speed automatic gearbox, and can gallop to 100 kmph from standstill in 11 seconds 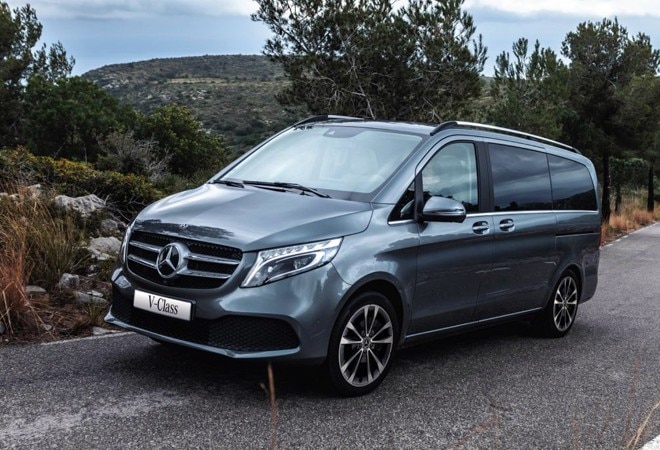 Would you buy a smart-looking, feature-rich, luxurious 6-seater van for over Rs 1 crore? India's largest luxury carmaker Mercedes Benz thinks a lot of us would.

On Thursday, the German company launched an uber luxury variant of its V Class utility van with a suffix Elite attached to differentiate the two, at a whopping Rs 1.1 crore. That makes the V Class Elite the most expensive 6-seater van ever in the country.

The company claims it has received good response from the regular V Class that was launched earlier in January this year and an uptick in demand for luxury cars in the last two months has prompted it to launch this version. The regular version of the MPV is priced at Rs 68.4-81.9 lakh (ex-showroom).

The Elite is powered by a new BS-VI compliant 2.0-litre diesel engine, tuned to make around 161 bhp and 380 Nm of peak torque. It gets a 9G-Tronic 9-speed automatic gearbox, and can gallop to 100 kmph from standstill in 11 seconds.

As has become the norm, MD and CEO Martin Schwenk did not give out outright numbers but said the company has already delivered three-digit numbers of the V Class. He also added that it has already sold the allocations of the top of the line off roader G Class within three weeks of launch. Further, the company has been able to sell its entire stock of the current generation GLE SUV three months in advance ahead of the launch of the next generation version during the Auto Expo in February next year.

The company had registered a 15.9 percent decline in sales in India in the first nine months of this calendar year at 9,915 units.

"There has been a revival in demand in the market. We delivered over 800 cars during the festive season this year which was satisfactory for us," Schwenk said.

Earlier the company had said it had delivered 200 cars during Dussehra and Navratri in the first week of October in Mumbai and Gujrat and around 250 cars in Delhi-NCR on Dhanteras on October 25. Overall, it delivered 600 cars on the day of Dhanteras which sees the highest number of vehicle deliveries for a single day in the year.

The V Class Elite comes with a few styling updates including a revised grille with more prominent-looking twin slats and the three-pointed star logo. It also gets slightly tweaked headlamps, along with an all-new, sportier-looking bumper with a wide mesh grille, and chrome details around the borders and a new set of alloy wheels.

Offered only as a long-wheelbase 6-seater option, new features on the inside include luxury seats with massaging function and climate control, and 640 W Burmester surround sound system with 15 speakers and a refrigerated compartment in the centre console. Even at that price there are a few optional bits including panoramic sunroof and 18-inch alloy wheels over the standard 17-inch units.

ALSO READ:Mercedes-Benz starts booking for GLE SUV; to be launched in India next year

ALSO READ:Diamond-studded Mercedes is a complimentary gift! But, you have to buy jewels worth Rs 50 crore