The Supreme Court order would spell relief for those planning to buy ordinary diesel cars as the National Green Tribunal interim order had brought them under the ambit of the ban. The court also indicated that it would double the environment compensation charge from the existing Rs 700 to Rs 1,400 for light vehicles. (Photo: Mail Today)

This definitely is a huge setback for those who were gearing up to own a diesel SUV or a luxury sedan in Delhi. Taking its crusade against the toxic air in the national capital to new heights, the Supreme Court, holding that the "rich cannot be allowed to pollute the environment", said on Tuesday that it would ban registration of diesel vehicles with engine power of more than 2000cc till April 1, on a trial basis.

The court is likely to pronounce a formal order on Wednesday. "Why should rich people move around in expensive diesel cars causing pollution when they can afford petrol cars? Here, life of people are at stake and you are more worried about the dealers? You are selling cars to the rich, while the common man suffers", Chief Justice T S Thakur told lawyers of car dealers association who pleaded for some more time before the order is implemented, to sell off the existing stock. 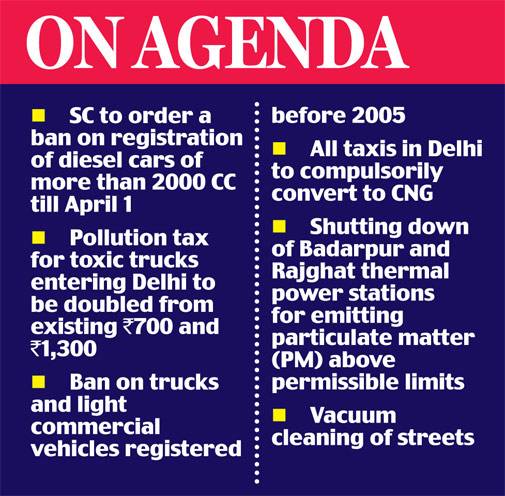 On the other hand, the SC order would spell relief for those planning to buy ordinary diesel cars as the National Green Tribunal had in its December 12 interim order also brought them under the ambit of the ban. Being the superior court, SC's order will override any direction passed by the NGT. The court also indicated to the Delhi government, MCD and toll contractors that it would double the environment compensation charge from the existing Rs 700 to Rs 1,400 for light vehicles and from Rs 1, 300 to Rs 2,600 for two-axle trucks, three-axle trucks and four-axle trucks that enter Delhi and spew poisonous fumes.

Though the toll contractors and MCD said the present charges have resulted in 30 per cent decrease in the entry of non-destined trucks to Delhi, the judges were of the view that the fine would be a "proper deterrent" only if it was doubled. The bench said the government shall use the money to improve the environment, augment public transport, improve roads and make extra facilities for pedestrians and cyclists as was mentioned in its earlier order.

"Trucks take alternate routes when entering Delhi just to save toll tax. In the process, pollution caused by such traffic inflicts heavy cost on the health of the residents of Delhi. If you are not destined for Delhi, then don't come. If you come, be ready to pay the heavy tax", the bench said. The Supreme Court is also likely to suggest alternatives routes which can be taken by such non-destined trucks and ask toll operators at city's nine entry points to display them prominently for the benefit of the truck drivers.

The Chief Justice-led bench said it would not allow the plying of trucks and light commercial vehicles registered before 2005 through Delhi and also make it compulsory for all taxis in the national capital to convert to CNG. The court was acting on detailed recommendations submitted by amicus curiae (senior advocate assisting the court on an issue) Harish Salve and NGO Centre for Science and Environment represented by its Director General Sunita Narain.

The court was also hearing a PIL filed by Arvind Gupta, an economist who sought complete ban on diesel vehicles in Delhi. In his petition, Gupta said: "The data available from WHO shows that Indian cities are almost 10 times more polluted than the other cities of the world, which is a serious infraction of the fundamental rights of the citizens of India. The WHO estimates that more than two million people die every year from breathing in tiny particles present indoors and outdoors due to air pollution. PM10 particles, (particles of 10 micrometers or less) can penetrate into the lungs and may enter the bloodstream. They can cause heart disease, lungcancer, asthma, and acute lower respiratory infections."