With an output of 136.5 million, total tyre production fell for the first time by 6.7 per cent in the first nine months of 2019/20, based on monthly data available since 2015 . The production has been incessantly falling since January last year with the sharpest year-on-year (y-o-y) fall of 17.1 per cent in October 2019. The cumulative tyre production during April-December has posted a y-o-y single-digit growth since 2015/16 barring 2016/17 when the growth was close to 12 per cent. As for the full fiscal year, tyre production has been repeatedly growing since 2013/14 at an average rate of 7.8 per cent. 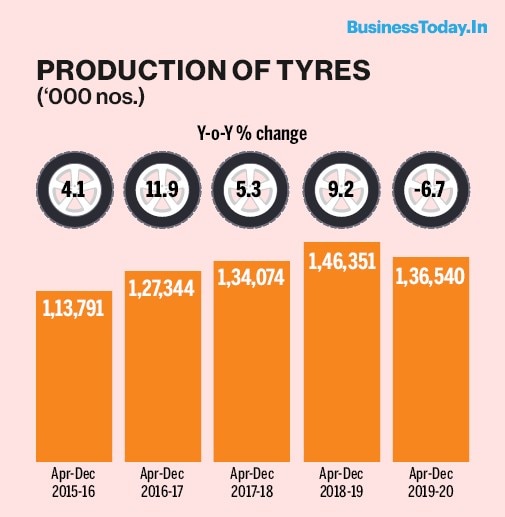 The decline in tyre production was on the back of a sharp fall in demand from the automobile original equipment manufacturers (OEMs) across all segments. Automobile production is at an eleven quarter low following a slowdown in the economy, lower infrastructure spending, sluggish consumer demand, tight financing environment, high dealer inventories and subdued rural demand, among others. Replacement demand for tyres also remained sluggish due to weaker than expected demand of replacing old tyres with new ones from fleet operators. CMIE expects the total tyre production to fall in 2019/20. In 2020/21, total tyre production is projected to increase. However, output is likely to grow at a moderate pace. Demand for tyres from the passenger vehicle and two and three-wheeler manufacturers is likely to revive in 2020/21. Although, demand for tyres from the commercial vehicle manufacturers will continue to be sluggish.

Country's tyre exports grew 5.4 per cent during April 2019 to February 2020. Anti-dumping duties imposed on Chinese tyres by the US helped India's tyre exports to grow during the year. Overseas demand for tyres will remain steady in 2020-21. Additionally, tyre manufacturers are focussing on newer markets of Europe, South East Asia, Australia and Latin America to augment their exports.

ALSO READ:End of the road for Etios, Xcent, Safari, Storme, Bolero Plus