The drop in the quarter ended December was a steep 22 per cent. In January, market leader Mahindra reported a 26 per cent drop in tractor sales. 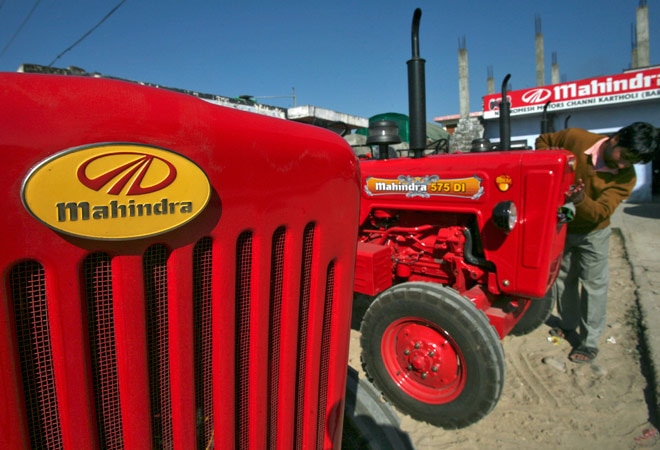 A worker cleans a Mahindra tractor outside its showroom on the outskirts of Jammu November 28, 2013. (Photo: Reuters)

Key factors that have contributed to this change is last year's below-normal monsoon, lower farm output and a moderation in growth of support prices of wheat and paddy.

Tractor sales have declined 8.3 per cent in the nine-month period (April-December) of the current financial year.

The drop in the quarter ended December was a steep 22 per cent. In January, market leader Mahindra reported a 26 per cent drop in tractor sales.

Tractor sales are a barometer of economic sentiment in rural India.

Recovery prospects over the very near term remain weak, said an Icra report on the tractor industry earlier this month.

The credit rating firm expects volumes to decline up to 10 per cent this fiscal year.

Sizeable capacity additions lined up over the next 15 months will likely exert pressure on capacity utilisation and prompt manufacturers to aggressively compete for market share.

The report added that the slowdown is seen across regions and not limited to western and southern India, as was the case in 2012/13.

Madhya Pradesh, which is expected to record agriculture growth of 25 per cent this year, saw a 20 per cent drop in volumes of tractor sales during the nine-month period.

Some argue that the drop came because of a higher base in previous years.

The state had registered a compounded annual growth rate of tractor sales of 27 per cent for a four-year period ended March 2014.

An interesting growth story was seen in Karnataka where volumes increased 20 per cent on relatively better rainfall.

The central government has moderated the increase in support price of wheat and paddy. It has persuaded states not to grant bonus on wheat and paddy procurement.

The kharif grain output slipped 7 per cent to 120.27 million tonnes last year due to a deficit monsoon. Tractor makers are betting on a better rabi crop that will be harvested in March-April.