Volvo hopes e-mobility will help it tackle the Germans

Volvo that was bought over by China's Geely back in 2010, has announced it will stop launching cars that are powered only by a combustion engine as early as 2019. Swedish luxury carmaker Volvo is hoping the increasing clamor for electric mobility and its own advanced timeline for the same will eventually give it some added advantage against the big three German rivals - Mercedes, BMW, and Audi, in India.

Volvo that was bought over by China's Geely back in 2010, has announced it will stop launching cars that are powered only by a combustion engine as early as 2019. It is the most aggressive and advanced timeline for electrification by any global car manufacturer. Though it does not mean Volvo will stop making petrol and diesel cars altogether - that will probably happen in another 5-6 years when its entire model line up is fully refreshed - but it may put the company in a bit of a spot in markets like India where the infrastructure to support electric cars may not be ready in time.

India has only recently started to think about electric mobility unlike markets like Sweden (Volvo's home country), Norway or China.

"Yes, it will be very challenging. There is no doubt about that," says Charles Frump who took over as the managing director of Volvo Cars India only five weeks ago. "The Indian government wants to fast-track electric mobility. We as a company have already spelled out our intention in this area. Somewhere, both these sentiments will align decisively. I am hopeful that will give us an edge over the others. We want to be the leaders in green technology."

It has been a decade for the Scandinavian firm in India and the journey so far has been anything but flattering. When Volvo entered in the second half of 2007, it was barely a year later than BMW and Audi and a year ahead of Jaguar Land Rover. It has been forever outflanked and outrun by the Germans both in sales as well as network expansion. Not for lack of wanting though. On various occasions, Volvo has tried to up the ante by launching new products but it is almost always followed by a period of lull that brakes the momentum.

"I would not contest that we have been slow but we are a small Swedish company and do things our own way," Frump says. "India is a very dynamic and interesting market with its merits and pitfalls. We know the taxation policy is not in favor of the luxury car industry but the potential is such that we need to commit to this market. So we are taking some decisive steps now like starting assembly operations in Bangalore and getting all our cars here within six months of their global launch."

On Tuesday, as the company launched the next generation version of the XC60 sports utility vehicle, one of its better selling models in India, Frump promised Volvo will be able to corner 10 percent of the luxury car market in the country by 2020 which would mean it would double its sales by that time. Thereafter it would be the progress of electric mobility in the country that may decide its fate.

"We are better placed in this field that any of our competitors. Our entire range of cars can be converted into electric cars so in a scenario where electric mobility really takes off here, whenever that maybe, we will stand to gain the most," says Frump, who has in the past worked in markets like China and Japan. "We also have the full range - mild hybrids, plug in hybrids and full electric vehicles - so whatever vehicles the government wants to promote, we have it all."

BMW vs Mercedes Benz vs Audi vs JLR vs Audi 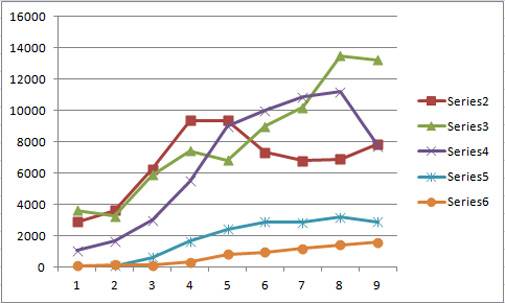