With IndiGo Airlines overtaking Air India (AI) in market share last month, serious concern has arisen among the staff of the government-owned airline on whether the company that handles its call centre operations is passing on vital information about customers to the rival airline.

InterGlobe Enterprise, that runs IndiGo, is also the holding company for InterGlobe Technologies (IGT), the firm selected by AI last year for handling its call centre service. The selection was done through a competitive bidding process.

According to AI insiders, "our call centre is run by the IGT and they possess all vital information about the passengers we book. Chances of a conflict of commercial interest could not be ruled out as the company is managed by the same holding company as IndiGo."

The booking data includes names of passengers, their contact numbers, flight details, the price of tickets and even meal preferences - all of which is an important input for competition. 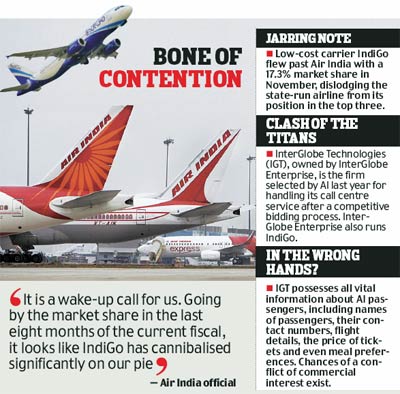 IGT is also in the process of setting up a data mart for AI for real-time information on passengers aboard its flights, company officials said.

"It is a wake-up call for us. Going by the market share in the last eight months of the current fiscal, it looks like IndiGo has cannibalised significantly on our pie," the staffers said. When contacted, an IGT official refused to comment on the issue.

The AI spokesperson told MAIL TODAY that technical bids and proper procedures were followed for its call centre service last year. "I do not think there should be any such thing happening which go against us," he added.

AI was displaced last month from its regular position amongst the top three companies in market share after Jet Airways and Kingfisher Airlines Budget carrier IndiGo flew past with a 17.3 per cent market share in November compared with a 17.1 per cent remaining with the national carrier.

While AI's market share has been declining in the April-November period this year the share of IndiGo has reflected an increasing trend.

According to sources, erstwhile Deccan Aviation, which had initially given its centralised reservation services to IGT, had migrated to another service provider Radixx Reservation System in March 2007.

Pesky calls to stay, for now