The combined operating profits of scheduled Indian carriers in 2018/19 turned red for the first time since 2015/16. However, it should be noted that while many private airlines started their operations during this period, some of them shut too The Indian aviation sector is bearing the brunt of Air India's failure as it contributed 61 per cent to total operating losses of all the airlines put together in 2018/19.

The country's aviation sector has hit a rough patch, going by the bleak financial performance of airlines. The combined operating profits of scheduled Indian carriers in 2018/19 turned red for the first time since 2015/16. However, it should be noted that while many private airlines started their operations during this period, some of them shut too. As per the provisional data provided by the Indian carriers in a Lok Sabha reply, around 12 private carriers (excluding Jet Airways) and three national carriers posted aggregate operating loss of Rs 7,088 crore in 2018/19. In 2017/18, the operating profits stood at Rs 913 crore, but after excluding Jet Airways and Jet Lite from the sample, which together posted an operating loss of Rs 743 crore during the same year, the aggregate operating profits came in at Rs 1,655 crore. 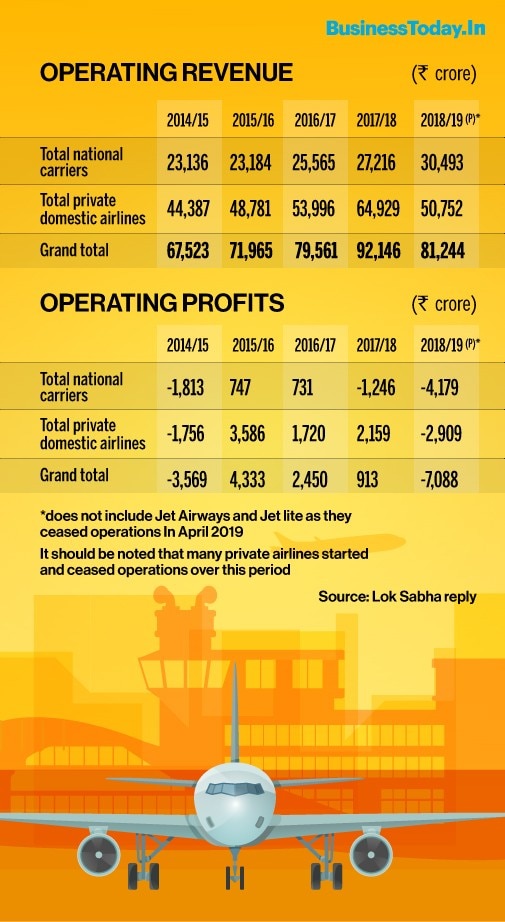 The sector is bearing the brunt of the Air India's failure as it contributed 61 per cent to total operating losses of all the airlines put together in 2018/19. Other prominent loss-making airlines include GoAir, SpiceJet, Vistara and IndiGo with operating losses of Rs 897 crore, Rs 266 crore, Rs 846 crore and Rs 149 crore, respectively. 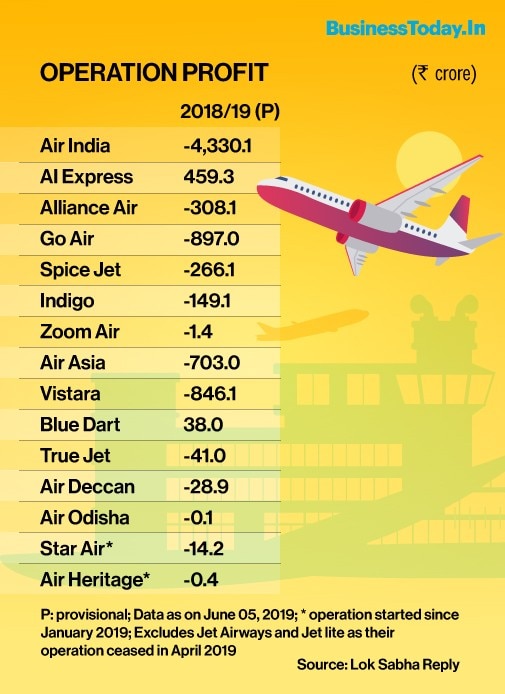 The poor show is surprising despite the sector seeing an impressive traffic growth and high capacity utilisation levels recorded last fiscal. Domestic air passenger grew 13.8 per cent in 2018/19 and 18.8 per cent in 2017/18.

What led to this tumultuous journey? "The critical factor is the surge in the prices of aviation turbine fuel, where forex risks also play a role. Secondly, this space needs an environment with growth in consumer credit. While crude oil prices fluctuated, the rupee weakened to 74 against dollar from 64- 65," says Mustafa Nadeem, CEO of Epic Research.

The rupee, which currently trades at 71 per dollar, has been volatile all through the year and depreciated 6.5 per cent against the greenback in the last fiscal. It has depreciated 2.1 per cent year-to-date.

Crude oil (Brent) prices, on the other hand, scaled up 22 per cent in 2018/19. It had increased 19 per cent in 2017/18. It remained almost stable in 2016/17 with an increase of just 2.6 per cent. Crude oil prices saw a sharp recovery post June 2016 when it inched above $60 per barrel. After December 2017, the higher cost of ATF started hurting the airlines financially. The ATF prices in Delhi rose around 25 per cent in 2018/19. Domestic airlines pay an average 35-40 per cent higher price for ATF than international airlines. "ATF prices are inclusive of 11 per cent basic excise duty. An additional 5 per cent basic customs duty and 11 per cent additional customs duty is also applicable in case of imported ATF. An additional state level sales tax is levied (20-30 per cent) with an exception of few states (Andhra Pradesh) and city-specific relaxation as provided for by respective state governments," explains a CARE Ratings report.

The state level taxes contribute to this difference in ATF prices for domestic and international airlines. Additionally, fuel expenses account for the biggest chunk of operating cost of this sector with an average share of around 40 per cent to the revenues. "ATF expense is the single largest expense for any airline, which is heavily dependent on crude oil prices, and the several economic and political factors that govern them. With the recent spike in crude oil   prices and the dollar index climbing over the past one year, ATF prices will continue to rise in the near-term," adds Amit Gupta, Co-Founder and CEO, TradingBells.

From grounding of Boeing 737 MAXs to the grounding of Jet Airways flights as a whole, the past six months have been quite dynamic for the airline Industry. Better pricing in a low competition environment due to grounding of Jet Airways helped IndiGo fetch higher yields, thereby driving revenue growth in the first quarter of FY20. However, due to grounding of Boeing 737 Max, Spicejet was unable to fully capitalise the vacuum created after Jet shutting its operations but it managed to exhibit encouraging results. In the first quarter of 2019/20, IndiGo and SpiceJet reported net profit of Rs 1,203 crore and Rs 262 crore, respectively. Offering some respite, the crude oil and ATF prices have been on a downward trajectory over the few months and have declined 15 per cent and 8 per cent year-on-year between June and August 2019. This could be short-lived as crude prices jumped almost 20 per cent on Monday, the highest-ever surge in over three decades after drone attacks on two oil facilities in Saudi Arabia, which contributes 5 per cent to the world's total crude oil supply. This could lead to a spike in global crude oil prices, which could increase costs of the airline industry. "High fixed costs, extensive regulations, the inadequate market supply of pilots and the inability to recruit and retain key talent, airport infrastructure and slot constraints at key airports, as well as operational issues with certain types of aircraft (such as A320 neo engines) are some of the key reasons troubling this sector recently," adds Gupta.

Moving further, weak consumer sentiments are reflected in the subdued air passenger traffic growth, with a meagre 1.6 per cent increase between April and July 2019. It had grown over 15 per cent in the corresponding period over the past four years. It has grown 1.8 per cent in the month of July (y-o-y) compared to a growth of 6.21 per cent in the preceding month. ALSO READ:Why Air India is like a house of cards?

As incremental supply finds its way into the market, while yields may normalise going forward. Brokerage Kotak Institutional Equities believes that all airlines will have enjoyed strong yields in April-May when the deficit on account of Jet Airways was at its highest. This can correct as the industry enters into the second quarter, which is a seasonally weak quarter. Domestic passenger traffic growth is expected to be moderate during the year and would take considerable time for domestic airlines to make up for the extinguished seat inventory.

"We believe going forward, disowning short term disruptions, and stability in currency and ATF prices should fuel a stable long-term positive outlook for this sector, but short-term outlook is weak due to currency depreciation, rise in crude prices, softening GDP and geopolitical tensions," says Nadeem.

Will you get only floating home loan interest rate in this country, ask SBI chief