Asked about the investor's profile, the airline's chairman Vijay Mallya said he is unable to reveal anything at this moment as it is something that would breach the confidentiality of agreement. 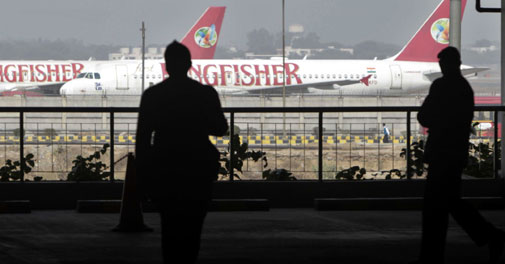 Kingfisher Airlines is in talks with a foreign investor for potential stake sale, its Chairman Vijay Mallya has confirmed. He, however, refused to divulge the investor's name.

The cash-strapped carrier has been grounded for almost a year now under the burden of huge debts totalling over Rs 7,000 crore and accumulated losses of more than Rs 16,000 crore.

"I expect this to take some form or shape in about 90 days. That is in my own estimate. It could be longer or it could be even earlier," Mallya said after the annual shareholders meeting of the company on Tuesday.

Asked about the investor's profile, Mallya said he is unable to reveal anything at this moment as it is something that would breach the confidentiality of agreement. "The investor is very sensitive to identity being revealed. Let us really give it a good try to get Kingfisher Airlines started," he added.

To a query, Mallya said the United Breweries Holdings Limited (UBHL) Board has considered the request of Kingfisher Airlines Board for continued funding in the light of the prospective investor and agreed to provide some funding for the carrier.

"UBHL itself cannot use its own funds and its assets that it currently has because of the restraining order from the Karnataka High Court. We have in fact applied to the court's permission to use part of this fund, and now it is in the hands of the honourable court," the liquor baron said.

On the response of the Directorate General of Civil Aviation (DGCA) to the airlines' submission of revival plan in a bid to restart limited operations, Mallya said the company had not heard from the aviation regulator but gathered informally that they would like to see recapitalisation plan.

Asked whether UBHL has agreed to pay employees' salaries, Mallya said: "Yes, that is the principle request before the honourable court."

To a question, Mallya said issues with its creditors are bilateral in nature and would talk to them from time to time. "Some of them have preferred bilateral negotiations in good faithful spirit and some have gone to court. We have to deal with all these issues as they come along."

On Malaysian low-cost carrier Air Asia impacting the aviation sector in India after its foray into the country, Mallya said Kingfisher Airlines was never a low-cost carrier and always challenged the very use of the word. "If at all, it will have an impact on the full service space, but good luck to all those who are starting."

Asked how he saw the aviation sector panning out in next year or so, Mallya said: "If you take all three components - current crude oil prices, the value of rupee versus the dollar etc - as they exist, obviously it is very challenging. And I don't know whether there can be full recovery."