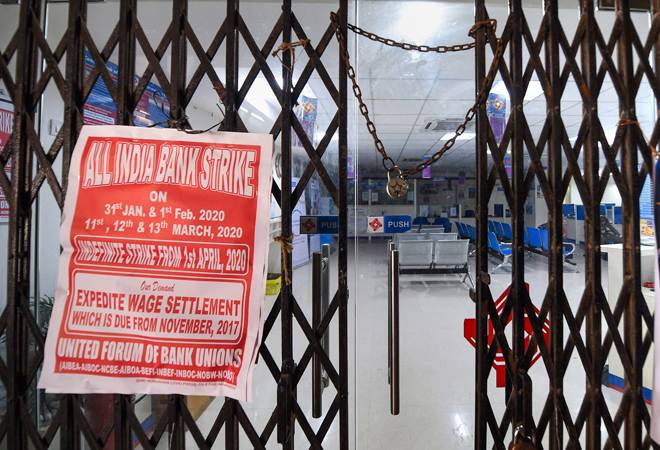 Bank strike: Around 31 lakh cheques amounting to Rs 23,000 crore remained uncleared across the country on Day 1 of the strike

Bank employee unions went on a two-day strike on 31 January over wage revision and other demands. According to All India Bank Employees' Association (AIBA), around 31 lakh cheques amounting to Rs 23,000 crore remained uncleared across the country on the first day of the strike.

"In the clearing grids in Mumbai, Chennai and Delhi, about 31 lakh cheques worth about Rs 23,000 crore could not be cleared due to the strike," All India Bank Employees' Association (AIBEA) general secretary C H Venkatachalam said.

On 1 February as well, bank branches will continue to remain closed, adding to the woes of the public on the salary day.

The unions are demanding a 20 per cent hike on payslip components with adequate loading. One of the bank unions, United Forum of Bank Unions (UFBU), decided to go on strike after its discussion with Indian Banks Association (IBA) on wage revision failed in the recent round of negotiations held on January 30.

In the latest round, IBA improved their offer to 12.5 per cent, but this was not acceptable, the unions said.

However, the IBA in a statement said despite the revised offer of up to 19 per cent hike, including performance-linked incentive, made by it during the meeting on Thursday, the unions decided to go ahead with the all-India bank strike.

The past wage settlement happened in 2017 wherein the employees got a 15 per cent hike for the period 1 November 2012 to 31 October 2017. Earlier in January, several bank employees had gone on strike in support of ten trade unions against the "anti-people policies of the government".

The strike call has been given by the United Forum of Bank Unions (UFBU), an umbrella body of nine bank unions, including All India Bank Officers' Confederation (AIBOC), All India Bank Employees Association (AIBEA) and National Organisation of Bank Workers (NOBW).

Also read:SBI customer? ATMs may run dry over weekend due to bank strike