Reserve Bank of India governor Raghuram G Rajan has been awarded the Fifth Deutsche Bank Prize for Financial Economics 2013, in recognition of his ground-breaking research work which influenced financial and macro-economic policies around the world. 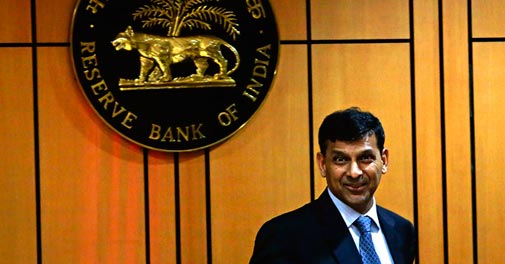 Reserve Bank of India governor Raghuram G Rajan has been awarded the Fifth Deutsche Bank Prize for Financial Economics 2013, in recognition of his ground-breaking research work which influenced financial and macro-economic policies around the world.

The academic prize is sponsored by the Deutsche Bank Donation Fund and carries an endowment of euro 50,000. The Centre for Financial Studies (CFS) awards the prize bi-annually in partnership with Goethe University Frankfurt.

Presenting the prize to Rajan, Deutsche Bank co-chairman Juergen Fitschen yesterday said that it would have been hard to find a more deserving winner for this year's award.

He noted that Rajan had in 2005 warned about the dangers of building up "unsustainable imbalances in the financial system," three years ahead of global financial crisis.

"Prof. Rajan's work revealed that the relationship between the financial sector and the rest of the economy is so complex that it is not good enough to simply look at the size of the financial sector in relation to the gross domestic product (GDP), as is done so often at present," Fitschen said.

He had also "warned us about the dangers of using or rather misusing" financial regulations and financial systems for purposes other than their original objectives, for example, for safeguarding stability or fostering growth, the Deutsche Bank co-CEO said.

The housing bubble in the United States, which triggered the financial crisis in 2008, had highlighted the danger of using the financial system to make up for the failures in social policies.

Jury chairman and director of the Centre for Financial Studies Michael Heliassos said the organisers are quite pleased to welcome Rajan in his new capacity as the RBI governor.

Rajan was picked up for the prize from more than 260 nominations from top universities, central banks and research centres in 37 countries. More than half of the nominations came from the US.

Banking licence applicants will have to wait: Bimal Jalan