The bank raised $750 million in 5-year money at US treasury interest rate plus 205 basis points, while it priced the 10-year $500 million issue at 225 bps over the treasury, one of the merchant bankers told PTI. 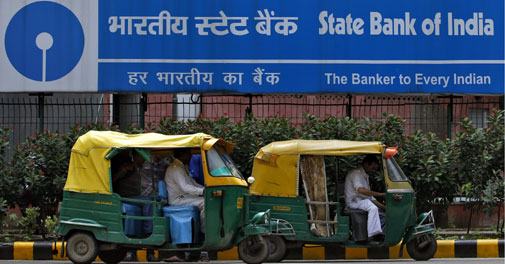 Nation's largest lender State Bank of India (SBI) has mopped up $1.25 billion in overseas debt sale through a dual tranche bond programme, making it the largest ever offering from a domestic issuer.

The bank raised $750 million in 5-year money at US treasury interest rate plus 205 basis points, while it priced the 10-year $500 million issue at 225 bps over the treasury, one of the merchant bankers told PTI.

The programme was completed late last night, said the source.

SBI has broken the record set by Oil India earlier this week by raising 25 per cent more than the oil explorer.

On Tuesday, Oil India had raised $1 billion from a dual tranche issue, making it the single largest dual tranche Reg S issue from the country by then.

The SBI issue is also cheaper than OIL issue as the oil PSU had priced the five-year of $500-million at US treasury rate plus 222.5 bps, and the 10-year money of the same size at treasury plus 272.5 bps.

The sharp tightening in final pricing of the Reg S SBI issue shows the investor appetite, according to the i-banker.

The bank chairperson could not be reached for comments, while the CFO refused comments.

The merchant banker said the issue received huge over subscription with the order book for the 5-year issue reaching $3 billion, and that for the 10-year bond touching $2.9 billion.

The 5-year issue attracted bids from 230 accounts, while the same for the 10-year issue stood at 290 accounts.

The investor breakdown by regions stood at 53 per cent non-resident US investors; 24 per cent from Asia; and 23 per cent from Europe for the 5-year Reg S issue, while the investor type were 70 per cent asset managers/fund houses; 15 per cent banks; 9 per cent private banks and 6 per cent insurance and others.

With regard to the 10-year tranche, of the 290 accounts, 40 per cent came from the non-resident US investors, 33 per cent from Europe and the rest 27 per cent from Asia.

The investors included 50 per cent asset managers/fund houses, 30 per cent banks and the remaining 20 per cent insurers, corporates and others.

After the Reserve Bank left the key policy rates unchanged earlier this month, which has pushed up interest rates in the domestic market, the pipeline for forex debt is bulging with public sector heavyweights like OVL, OIL and large private corporates like Bharti queueing up to raise up to $5 billion through bond sales in the US and Europe.

Last month, Bharti reportedly said it would tap the forex debt window for $2 billion by July out of which $400 million will be raised shortly.

According to merchant bankers, despite the spike in interest rates in the West following the US Fed's tapering talk, domestic companies can still secure credit up to 500 bps cheaper than the onshore markets even after hedging.

ONGC Videsh is also tapping the forex debt window to raise up to $1 billion in bond sale to pre-pay a bridge loan of $2.2 billion it had raised earlier this year for the Mozambique oil blocks. It will be raising the debt by pledging future crude oil production from its overseas assets.

Power Finance Corporation is planning a USD 500-700 million issue while Rural Electrification Corporation planning to mop up $1 billion, according to i-bankers, and IFCL is eyeing close to $1.5 billion.

The domestic companies' overseas bond street journey was opened by Indian Railway Finance Corporation in early January with a USD 500 million issue, which got subscriptions of $3 billion and was priced at a coupon of 3.917 per cent.

After a massive bond sale last year worth $16 billion, up 60 per cent over 2012, the domestic companies have been going slow in tapping international bond market following rising interest rates there.

SBI hits global debt markets, to raise up to $1 bn