The portfolio comprises three plants with an asset life of over 50 years. The completion of the proposed transaction would make RPower the largest provider of hydroelectric power in the private sector in India. 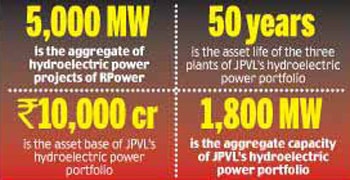 JPVL's hydroelectric power portfolio has an aggregate capacity of nearly 1,800 MW, which is fully operational, the largest in the private sector in India, and with an asset base of over Rs 10,000 crore. The portfolio comprises three plants with an asset life of over 50 years and each using run-of-the-river technology to convert natural water flow to electricity eliminating the need for a large reservoir.

RPower has hydroelectric power projects aggregating over 5,000 MW under development, of which 4,200 MW are located in Arunachal Pradesh, 700 MW in Himachal Pradesh and 400 MW in Uttarakhand.

The development comes merely four days after an Abu Dhabi-led consortium pulled out of a $ 1.6 billion deal to buy two hydroelectric power plants from JPVL dealing a blow to the Indian Group's efforts to cut its debt. Abu Dhabi National Energy Co (Taqa) told Jaiprakash Power that the decision was due to a change in the Group's business strategy and priorities, Jaiprakash had said in a stock exchange filing on Thursday.

Taqa had stated that it is exiting the deal, which was made public in March, because of "a change in strategy". Taqa is liable to pay a "break fee", Jaiprakash Power had said on Thursday without divulging any details about the amount involved.