The three wind farms, will have a combined capacity of 126 megawatts (MW) and support the Indian government's programme to generate competitively priced grid-interactive clean power, says the multinational. 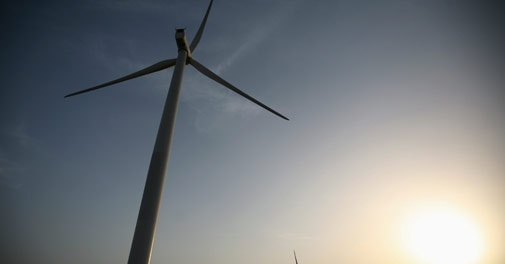 US multinational General Electric's (GE) financial arm announced on Monday that it has invested an unspecified amount in three wind projects of Atria Power from the $1 billion fund it budgets annually for renewable energy projects worldwide.

"The three wind farms, including one in Andhra Pradesh and two in Madhya Pradesh will have a combined capacity of 126 megawatts (MW) and support the Indian government's programme to generate competitively priced grid-interactive clean power," GE Energy Financial Services said in a statement in Bangalore.

The city-based Atria Power Corporation Ltd (APCL) is building a 25.6 MW project in Ananthapur district, about 190 km from Bangalore across the state border for commissioning in September, while the other two projects of 50 MW each are coming up in Betul district, about 180 km from Bhopal, and will be operated from December and June 2015.

"Of the total capacity, GE's wind turbines will generate 76 MW and the remaining 50 MW by turbines of another manufacturer under an operations and maintenance agreement," said Atria Power director Sunder Raju.

As one of the world's largest investors in wind power, GE's energy financial services arm has invested in multiple projects with a combined capacity to generate 13 gigawatts (GW) spanning nine countries the world over.

Atria already has 125 MW renewable energy farms and plans to add another 700 MW in wind and solar across the country.

"Our latest farms will help the country meet the target of 20 per cent energy generation from renewable sources by 2020," Raju added.

With about 5,300 scientists and technologists, GE's research centres in Bangalore, Chennai, Hyderabad and Mumbai are developing new technologies for India and the world, while its 13 manufacturing facilities across the country roll out products and services to its customers.