The government has accorded in-principle approval for setting up solar parks in Gujarat, Andhra Pradesh, Uttar Pradesh, Meghalaya, Rajasthan, among other states. 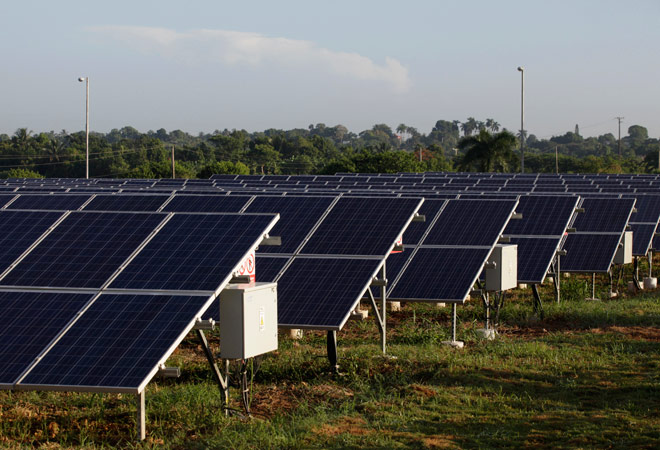 All states have been requested to identify land for establishment of solar parks. (Photo: Reuters)

The union minister of state for coal, power and renewable energy, Piyush Goyal, said that the government is ambitious to promote clean energy in the country.

He also outlined the Modi government's plans of increasing renewable power generation in the country.

"We are encouraging setting up of solar power projects through measures like grant of subsidy on off-grid applications, provision for renewable purchase obligation for solar in the National Tariff Policy, concessional import and excise duty exemption for setting up of solar power plants, accelerated depreciation and tax holiday, generation-based incentive and facility for bundled power for grid-connected solar power," he said, adding there are projects through various interventions announced from time to time.

Several research and development efforts have been initiated for new technologies and improvement in efficiency.

Projects under central or state schemes shall come up in these solar parks. Goel also said that various schemes have been launched to set up grid-connected solar power plants.

This includes setting up of 25 solar parks and ultra-mega solar power projects of aggregate capacity of 20,000 MW in various states and pilot-cum-demonstration project of 100 MW for development of grid connected solar photo voltaic power plants on canal banks and canal tops.

There is also a scheme for setting up 1,000 MW of Grid-Connected Solar PV Power Projects by Central Public Sector Undertakings (CPSUs) with Viability Gap Funding (VGF) under Batch-V of Phase-II of JNNSM.

All states have been requested to identify land for establishment of solar parks.

No proposal, however, has been received under this scheme from the Haryana. The ministry is promoting generation of electricity from various agro-residues including paddy straw.

A target of 400 megawatt biomass power projects for the 12th plan period and 100 megawatt during the current financial year has been set up.

The Central Financial Assistance of Rs 25 lakh per megawatt in special category states and Rs 20 lakh per megawatt for other states with a cap of Rs 1.50 crore per project is being provided by the ministry for setting up of the biomass power projects.