ONGC Videsh to get stake in Myanmar oil and gas block

Despite losing out in competitive bidding, ONGC Videsh Ltd (OVL), the overseas arm of state explorer Oil and Natural Gas Corp, may still get a stake in a deep-sea block in Myanmar. 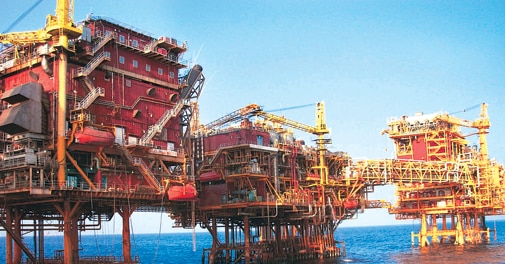 Despite losing out in competitive bidding, ONGC Videsh Ltd (OVL), the overseas arm of state explorer Oil and Natural Gas Corp, may still get a stake in a deep-sea block in Myanmar.

OVL had bid for two of the 10 shallow-water blocks that Myanmar had auctioned in December but drew a blank when the fields were awarded on March 26.

"We had a pre-bid understanding with an international oil company that if we were to win any shallow-water acreage, they will farm-in (pick up stake). Similarly, in case that company was successful in picking up any of the deep-sea acreages it bid for, we would get a stake," OVL Managing Director S P Garg said.

Garg refused to identify the company and said OVL could get up to 49 per cent in the deep-water oil and gas block won by the international company.

London-based Ophir Energy plc and Total of France each won a deep-sea block in Myanmar's maiden licensing round.

The other deep-sea blocks went to groups of global energy majors and it is unlikely that OVL had a pre-bid understanding with them.

RIL won shallow-water blocks M-17 and M-18 while OIL and its partners got blocks M-4 and YEB, according to Myanmar's Ministry of Energy.

State-owned gas utility GAIL had bid for three blocks but like OVL, it drew a blank.

Cairn India, which was among the 61 firms pre-qualified to bid for 11 shallow-water and 19 deep-water blocks in an international tender, did not bid by the December deadline.

A total of 19 deep-water blocks were offered in these areas and bids were received for only 10.

RIL's M-17 and M-18 blocks in Myanmar are located in the Moattama basin in water depths of up to 3,000 feet and together cover an area of 27,600 square kilometres.

According to the Myanmar ministry, BG will get two shallow-water and two deep-sea blocks, half of them as operator.