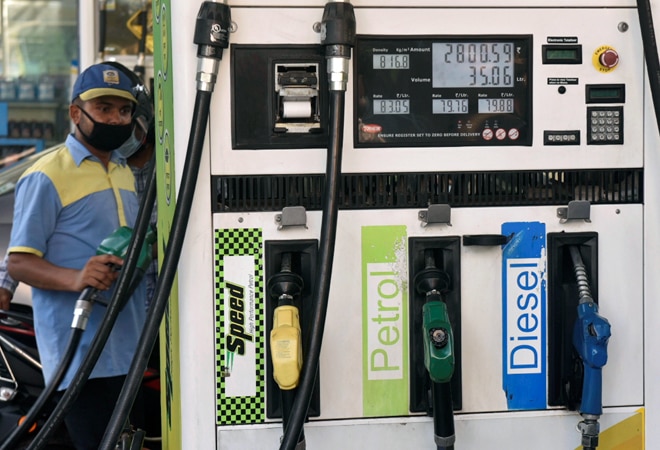 Yesterday, the old prices flared up with petrol hitting a new high of Rs 85.90 per litre and diesel at Rs 75.38 per litre in Delhi

Petrol and diesel prices remained unchanged across all metros on Wednesday after a record-breaking climb on the previous day. Yesterday, the old prices flared up with petrol hitting a new high of Rs 85.90 per litre and diesel at Rs 75.38 per litre in Delhi.

Crude oil has been on an upswing because of Saudi Arabia's additional supply cuts and growing optimism around the launches of the various vaccines against COVID-19.

In Mumbai, the price of petrol soared to an all-time high of Rs 91.80 a litre while diesel rates went up to Rs 82.13 per litre on Tuesday. Other metropolitan cities like Bengaluru,  Chennai, and Hyderabad also saw an unprecedented rise in fuel rates. The petrol rates in Chennai, Hyderabad, and Bengaluru stand at Rs 87.85/litre, Rs 88.63/litre, and Rs 88.07/litre, respectively.

Union Minister for Petroleum and Natural Gas Dharmendra Pradhan said fuel prices had gone up because of lower production in oil-producing nations due to the coronavirus pandemic. This lower production has caused an imbalance in demand and supply, the minister said.

India is the third-largest crude oil importer after China and the USA.

India's crude oil imports in December soared to the highest levels in nearly three years to more than 5 million barrels per day (bpd), according to Reuters. December oil imports by India were about 29 per cent more than the previous month and about 11.6 per cent higher than a year earlier.

In December, Iraq remained the top oil supplier to India followed by Saudi Arabia and UAE. Nigeria emerged as the fourth-biggest supplier, pushing the US down to the sixth position just after Brazil.

According to the union oil minister, the focus of the government was on electric vehicles (EVs), solar energy, production of ethanol, etc, to become self-reliant in the energy sector.

However, central excise and state taxes are also to be blamed for skyrocketing fuel prices, which amp the impact of high crude prices.

The Central government had raised the excise duty on petrol by Rs 13 per litre and diesel by Rs 16 in two tranches on March 16 and May 5 last year to tide over the COVID-19 crisis.

At that time, oil companies did not raise the pump prices and adjusted with excise duty due to the falling crude rates. And, when the states hiked VAT, the companies passed it on by raising prices.

In October 2020,  when fuel prices soared to record-high levels, the government cut excise duty by Rs 1.50 per litre on both petrol and diesel to ease the pressure on consumers and boost demand.

But the scant cut in excise duty has not resolved consumer's problems as the demand and international crude prices have continued to escalate simultaneously in 2021.