In July, IT firm ValueLabs finished building a 13 MW solar plant - enough to power 6,000 homes and computers humming for over 3,000 employees at its base in Hyderabad. 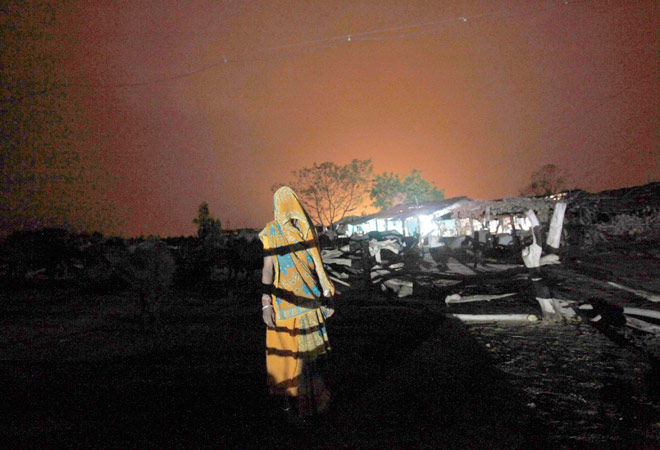 A woman stands in front of an illuminated house powered by solar energy at Meerwada village of Guna district of Madhya Pradesh. (Pictue for representation purpose only, source: Reuters)

Fed up with constant electricity cuts and government-enforced "power holidays", Indian IT firm ValueLabs has turned to the sun beaming down on its head office for help.

In July, it finished building a 13 megawatt solar plant - enough to power 6,000 homes - to keep the lights on and computers humming for more than 3,000 employees at its base in Hyderabad.

It is even selling surplus electricity back to the grid.

"We plan to use the entire quantum of power generated from these plants in the coming years for our existing and upcoming campus," said Krishna Reddy, a senior ValueLabs executive.

Factories and businesses have installed over 30 MW of rooftop solar panels in the last year, data compiled by New Delhi-based consultancy Bridge To India shows. That is a small amount compared with India's solar capacity of 2,700 MW, but demand may accelerate under Prime Minister Narendra Modi who has made renewable energy a priority.

Bridge to India forecasts compound annual growth will hit more than 60 per cent in the next five years, as falling panel prices make installations more alluring.

In a sign that even big business is warming up to alternative energy sources, India's second-largest IT exporter Infosys is building a 50 MW solar plant in Karnataka to meet 30 per cent of the company's power needs.

Bridge To India estimates that commercial rooftop and smaller utility plants have the potential to provide up to 83,000 MW of solar energy, more than half of India's potential solar capacity out to 2024.

"With the new government coming in, we see a clear intent to further increase allocation of solar in the energy mix," said Sujoy Ghosh, India head of US-based First Solar.

Along with SunEdison, First Solar is among foreign panel suppliers expecting to profit from rising demand in India.

The new government is hoping to ramp up renewable energy, and wean the country off of a dependence on coal and oil and fulfil Modi's election pledge of bringing power to all.

While India's overall installed capacity has risen 20 per cent in the past three years and peak-hour shortfalls have eased, not enough power reaches end-users due to rickety transmission lines, and when it does, supply is often fickle.

Many southern states, where ValueLabs and Infosys are based, enforce power cuts to keep a check on demand. Across the country, businesses are forced to buy costly back-up generators in case of outages.

States in the arid north and west are building big solar plants at the fastest pace, though smaller commercial projects are cropping up across India, where nearly all states enjoy year-round sunshine, analysts say.

But, as for many in growth economies looking for ways to cut back on oil imports, costs are high on the whole and even early adopters say solar is only part of the answer.

ValueLabs spent 1 billion rupees ($16.3 million), which it expects to make back in eight years. It is keeping its back-up generators.

The Kanpur-based Indian Institute of Technology is installing rooftop solar panels. Yet some 70 per cent of its energy will still come from conventional sources.

Despite Modi's plans to target up to 100,000 MW of solar generation by 2022, far more than an existing 20,000 MW target, India remains heavily reliant on conventional thermal energy.

Today, solar power generation accounts for about 1 per cent of installed energy capacity and a fraction of the 26,000 MW China can produce.

For now, individual companies say it is falling panel prices and government subsidies that have made solar more appealing.

Infosys says its own solar-generated power will cost it less than the 6.15 rupees per unit it pays for electricity from the grid, even after factoring in depreciation expenses. It did not say how much lower the costs were.

"The economics of doing this has improved. If you can get solar at a reasonable efficiency level, then it makes sense to have it as a main power source and have the grid as a backup," said Kalpana Jain, a senior director at Deloitte India.

India's electricity distribution companies, which are ordered by politicians to keep prices low, have little incentive to buy renewable energy - roughly 15 per cent pricier than thermal - because they cannot pass this on to consumers.

But for companies, choosing solar is still better than the alternative.

"We want to ensure we are free from power disruptions in the future," said ValueLabs' Reddy.

Premium on ATM use was wanted badly by banks