The National Green Tribunal on April 7 had banned construction works in at least eight locations in and around Noida Extension and Golf Course Road. 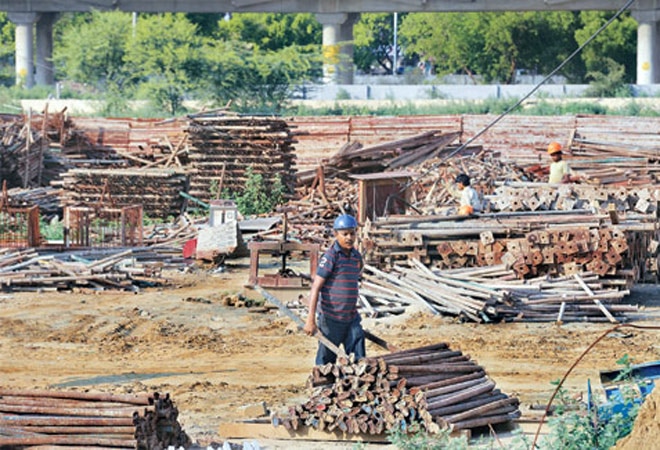 The green tribunal in its April 7 order had asked construction firms to provide masks to labourers. (Photo: Ramesh Sharma)

There's dust all over, but there's no mask for the labourers. There are no helmets and no gloves for them either. And the construction works are going on unabated at several locations in the National Capital Region, flouting the recent order of the National Green Tribunal.

The Tribunal on April 7 had banned construction works in at least eight locations in and around Noida Extension and Golf Course Road.

Mail Today visited four sites in Delhi and in the NCR region of Uttar Pradesh, and found that the labourers were deprived of the basics as has been mandated by NGT. There were no protective gears for the on-site workers, except for helmets at very few locations. Trucks transported construction material and debris quite openly. Construction debris was seen almost everywhere; there was hardly any vacant land that didn't have the debris. At some places there were some barricades as though to hide the debris.

Labourers have no idea about the NGT's ruling and what it entails for them, so far. Shambhu Yadav, 42, has been working as a mason for eight years now. He has worked at over two dozen construction sites all over north India and never been given a helmet or gloves.

Despite an order by the NGT in this regard, neither he nor his colleagues were ever provided with any such gear Project managers pretend as if they have never heard or read about the orders or even the Ministry of Environment and Forests' guidelines in this respect which have been in existence since 2010. Enforcement officers are conspicuous by their absence and the authorities seem to be happy with just putting up public advertisements.

At Noida Extension, also known as Greater Noida West, construction of about 40 private residential projects is on. Rakesh Ranjan, project manager at the site of an under-construction public sector bank in Dwarka Sector 23, asked, "What is the need for a mask? Not everyone is dealing with sand or cement." When pointed out that there were no sprinklers at the site, he said, "It has been raining for the past few days."

The basement of a private mega mall in nearby Sector 14 of Dwarka did not have a green belt; and the locals complained that it had consumed the adjoining service lane and the trees that stood next to it. Meanwhile, the Delhi Jal Board has been laying pipes from Vikaspuri to Meerabagh on the Outer Ring Road for a year now. MAIL TODAY found that the road has been dug up and the mud has covered the stretch. It's clear that the NGT's order has not reached the agency.

>> Every construction project must provide protective equipment like masks and helmets to its on-site workers. Site must have first aid facility also.

>> Trucks and dumpers at the site should restrict their speed to 20 kmph to reduce road dust dispersion.

>> Trucks and dumpers carrying construction material and demolition debris must be fully covered.

>> Construction materials like sand and cement must not lay outside the site and be covered with sheets to prevent dispersion.

>> Water sprinklers must be compulsorily used at construction sites to settle the dust.

>> Site must be barricaded from all sides.