Prime Minister Narendra Modi came to power after cutting the number of approvals needed for road projects in Gujarat, making it easier for investors to build dozens of new highways. He also restructured utilities to help Gujarat get almost 24 hour electricity. 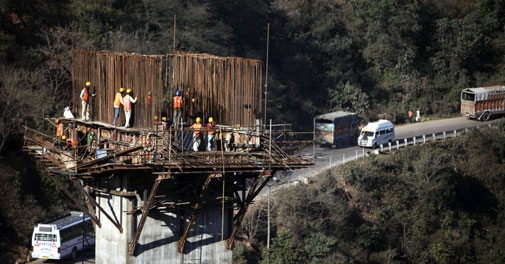 The new government is betting on Prime Minister Narendra Modi to replicate his relative success with regional infrastructure projects to ensure fewer public-private partnerships (PPP) stall for want of land.

The government wants private companies to contribute half of a $1 trillion investment target over five years to 2017 to alleviate clogged-up roads and end electricity blackouts.

But PPP contracts are often signed before specifying how much land authorities need to acquire by when. Difficulties moving occupiers has caused delays and prompted banks to cut credit lines, leaving scores of projects in limbo and deterring new investment.

"There is so much negativity around PPPs," said PPP expert Abhaya Krishna Agarwal at consultancy EY in New Delhi. "The new government needs to do a lot differently."

Transport minister Nitin Gadkari last month said one solution is to acquire 80 per cent of land for road projects before inviting private participation. To push through that and other reforms, the two-month-old government is banking on a premier who was elected in India's biggest landslide win in 30 years.

Modi came to power after cutting the number of approvals needed for road projects in Gujarat, making it easier for investors to build dozens of new highways. He also restructured utilities to make Gujarat India's only state with almost universal 24 hour electricity.

But Gujarat's former chief minister also has experience of a PPP going awry. A $4 billion power station in his home state almost closed last year because of a dispute over electricity prices.

The Modi government will address such "weaknesses" through a new body tasked with resolving "the rigidities" of existing contracts, Minister of Finance Arun Jaitley said in his Budget speech.

Road-building is particularly prone to PPP weaknesses. At least 600 billion rupees ($10 billion) worth of projects is unfinished, primarily because of difficulty obtaining the required land to lay, lengthen or widen roads.

One such casualty is the project to re-lay the Delhi-Jaipur "Pink City Expressway" and widen it to six lanes from four.

Three years after its scheduled completion and the inability to buy adjacent land has reduced the 225 kilometre road in places to one lane. Traffic is forced to take detours down single-lane service tracks into which houses, temples and even rubbish dumps jut.

While contractors and authorities blamed each other, banks cut funding preventing more land from being bought.

"We have had the pre-cast girders completed for every one of the (road's) bridges sitting in our factory for years," said Shashank Shekar, a senior manager at Pink City Expressway Pvt. Ltd which is overseeing the entire project. "We can't finish until we get the land."

Shekar said he would want "100 per cent of land" before starting another highway, rather than the transport minister's four-fifths pledge.

The National Highways Authority of India did not respond to requests for comment about the road.

Such cases could deter private participation in future projects at a time when the Modi government not only wants to reform PPPs, but expand them to cover sectors such as railways, gas grids and waste-and-water treatment.

The PPP drive is welcome but tweaking contracts to make them more flexible for renegotiation, and to ensure land is bought beforehand, will not be enough to pull in investors quickly, said R. Shankar Raman, chief financial officer at Larsen & Toubro Ltd, one of India's biggest industrial houses.

Analysts said the government will likely miss its 2017 infrastructure investment target, though it is not clear by how much nor what the per centage will be from private sources.

Private investors in the past few years have provided less than a quarter of capital for new infrastructure projects, instead focusing on repaying debt during a period of economic downturn, estimates EY's Agarwal.

"For PPPs to work, the private sector will have to come back to health," said L&T's Shankar, "Which it hasn't."