He said people lived in an era in which connectivity was all important, and that the Magenta Line, connecting South Delhi's Kalkaji Mandir to Botanical Garden in Noida, was not only for the present but also for future generations. 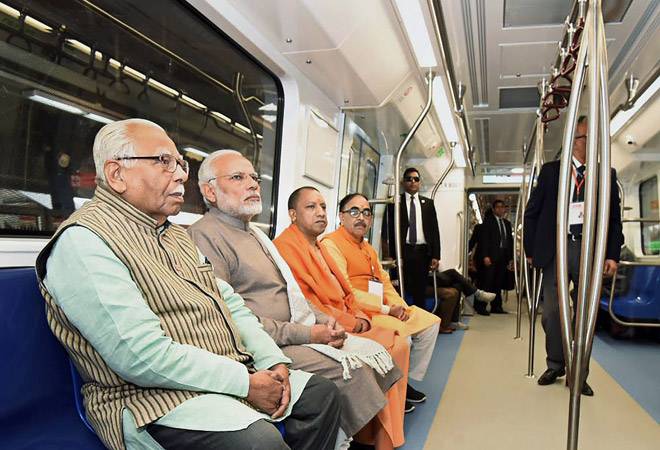 Prime Minister Narendra Modi takes a ride in a Metro from Botanical Garden Metro Station to Okhla Bird Sanctuary with Uttar Pradesh Governor Ram Naik and Uttar Pradesh Chief Minister Yogi Adityanath and other dignitaries after its inauguration in Noida on Monday. PTI

On the inauguration of the Delhi Metro Rail Corporation's Magenta Line in Noida on Monday, Prime Minister Narendra Modi said that by 2022 - the year in which India will mark 75 years of freedom - he dreamt of an India where "petrol imports would reduce, and to achieve this, state of the art mass transit systems are the need of the hour".

He said people lived in an era in which connectivity was all important, and that the Magenta Line, connecting South Delhi's Kalkaji Mandir to Botanical Garden in Noida, was not only for the present but also for future generations.

Around 15 years before on December 25 the first ever Metro train was started in Delhi. "On December 24, 2002, Atal Bihari Vajpayee Ji took the ride on the metro. This was a historic moment. Since then, the Metro network in NCR has expanded considerably," said the PM.

After the inauguration, Prime Minister boarded the metro from Botanical Garden and alighted at the Okhla Bird Sanctuary in Noida. For now, the metro will go till Kalkaji Mandir, while the entire corridor till Janakpuri West would be made functional by April.

The train reduces the metro travel time from 52 minutes to 19 minutes and also cuts down the journey cost from Rs 50 to Rs 30. The Unattended Train Operation (UTO) enabled trainsrunning on the Magenta Line makes it the first unmanned metro line, though it will run under human surveillance for a few days. Around 10 metro trains, bought from South Korea, will run on the Magenta Metro Line.

Urban Affairs Hardeep Singh Puri and Delhi Metro Rail Corporation chief Mangu Singh. The Prime Minister congratulated UP CM Yogi Adityanath for his focus on "good governance" and taking UP to "new heights". "I am very happy. Due to his dress, few people find it fashionable to believe Yogi Adityanath ji is not 'modern enough' but it is he who has done what CMs of UP did not do - he has come to Noida. Faith is important but blind faith is not desirable."

Yogi Adityanath said Prime Minister Narendra Modi had given a new meaning to politics of this nation. "He is always telling us one thing - we have to move ahead on the path of development. We should ensure no citizen is unhappy. There is no question of discriminating against anyone."