Jawaharal Nehru Port Trust aims to be among the top 15 ports of the world with implementation of several infrastructure projects, including the fourth terminal. 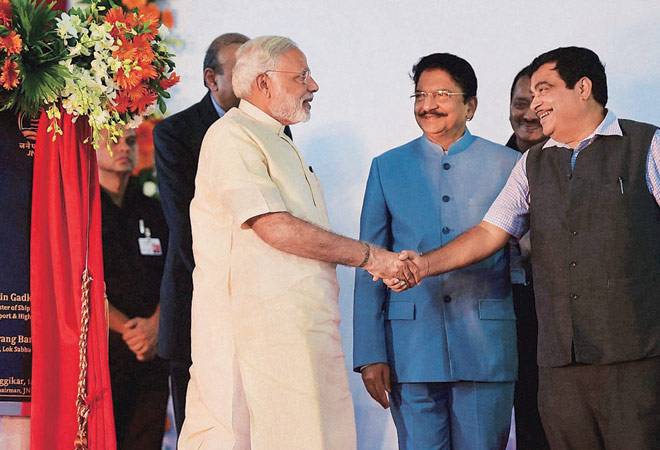 Prime Minister Narendra Modi kicked off the ambitious Rs 7,900-crore project to more than double the capacity of the country's largest container port Jawaharal Nehru Port Trust (JNPT) over the next two years in Mumbai on Sunday.

PM laid the foundation stone for the fourth terminal project of JNPT, which will be carried out in two phases and involves the single-largest foreign direct investment in the port sector in recent years. JNPT aims to be among the top 15 ports of the world with implementation of several infrastructure projects, including the fourth terminal. At present, it is ranked 31st.

The terminal will help the exports and imports by reducing the turnaround for ships, and the expansion is being taken up at a time when the country is aspiring to be a manufacturing powerhouse with the launch of the 'Make in India' initiative. The fourth terminal project is being executed by Bharat Mumbai Container Terminal, a subsidiary of Port of Singapore Authority, on a design, built, fund, operate and transfer basis under which JNPT will get a 35.9-per cent share in the total revenue earned.

"With the two-phased project, the overall container handling capacity of JNPT will more than double to 10 million standard units from the present 4.5 million," Union shipping secretary Rajive Kumar said.

Work on the project has been divided into two phases entailing an investment of Rs 4,719 crore for the first phase and Rs 3,196 crore in the second. The work is scheduled to be complete by the end of 2017.

The project involves construction of two berths of one km in each of the two phases and land acquisition is also minimal as 70 hectares will be reclaimed from the sea for each of the berths.

The event comes amid a growing trend of state-run major ports losing market share to the privately run non-major ports, which has resulted in Gautam Adani-led Mundra Port to emerge as the largest port by cargo handled.

JNPT is also developing a port-based special economic zone (SEZ) in 277 hectares with an estimated investment of Rs 4,000 crore and is expected to generate nearly 150,000 direct and indirect employment to the local population, according to JNPT chairman Anil Diggikar. The SEZ will have industries such as logistics, engineering goods and electronics.

Work on Kanpur Metro to begin from January 2016