The Supreme Court (SC) refused to entertain a plea of real estate firm Jaypee Infratech seeking a direction to Noida Authority to grant completion certificate to its projects falling within 10- km radius of the Okhla Bird Sanctuary. 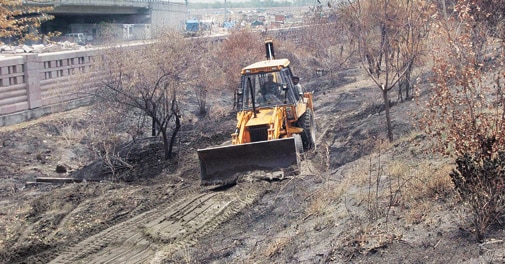 The Supreme Court (SC) on Tuesday refused to entertain a plea of real estate firm Jaypee Infratech seeking a direction to Noida Authority to grant completion certificate to its projects falling within 10- km radius of the Okhla Bird Sanctuary.

A Bench of Justices J. S. Kehar and C. Naggapan said, "Let the Central government take a decision on this issue," and dismissed the plea of the firm, which was filed against interim orders of the National Green Tribunal (NGT).

Senior advocate A. M. Singhvi, appearing for the firm, said that around 4,000 flats are ready for handover and a great humanitarian problem will arise if completion certificates are not issued by Noida Authority as it will lead to denial of possession to homes buyers who have almost paid 95 per cent of sale consideration.

The NGT on October 28, 2013 had issued an interim direction saying all the building constructions made within 10- km radius of the sanctuary or within distance of eco- sensitive zone as may be prescribed by the notification issued by the ministry of environment and forests (MoEF) shall be subject to the decision of the National Board of Wild Life (NBWL), and till the time the clearance of NBWL is obtained, the authority concerned shall not issue completion certificates to projects.

Later, the tribunal did not entertain a review plea seeking modification of the earlier impugned order. Jaypee Infratech said that the NGT relied on a SC order and completely misread the order to mean that the apex court had enforced/ implemented the 10- km eco- sensitive zone.

The NGT order restrained the authorities from issuing completion certificates for buildings constructed within 10 km from the boundary of the sanctuary as they fell under the eco- sensitive zone, it said. The orders adversely affected projects, which were started in 2008, after the grant of environment clearance by MoEF in 2007.

The firm is developing an integrated township in Noida spread over 1072 acres and it comprises flats, apartments, plots, houses, schools, recreational, commercial and medical facilities, the plea said.