Facboook founder Mark Zuckerberg agreed to long-term benefits: "We are optimistic that by getting more people on the Internet, it will help Facebook in the long term, too." 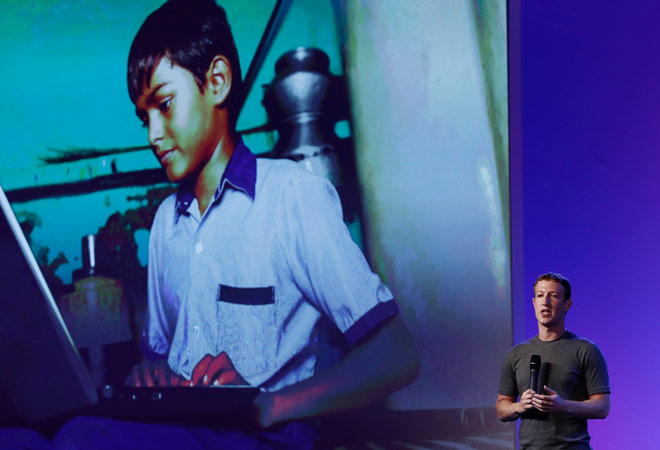 Mark Zuckerberg, founder and CEO of Facebook, addresses a gathering during the Internet.org Summit in New Delhi October 9, 2014. Photo: Reuters

After Microsoft CEO Satya Nadella and Amazon founder Jeff Bezos, it is Facebook founder Mark Zuckerberg 's turn to visit India. And why not? India is the world's fastest growing Internet consumer base with more than 240 million Internet users. The social network 's founder was in New Delhi to launch the Internet.org initiative-where companies like Facebook, Samsung, Qualcomm, Ericsson, Opera Software, Media Tek and Nokia are looking at connecting billions of people who are not yet using the Internet around the world.

After his keynote address to a broader audience, where industry leaders from companies like Microsoft, Tata Motors and PepsiCo participated, Zuckerberg took questions from the media in a closed door meeting. In response to a question on "creating monopolies" which opposes the concept of net neutrality by offering free services, Zuckerberg said: "We are trying to pioneer this model where an operator can offer free basic services-is way to make people understand why is the Internet valuable for them… There is no such rule that Facebook or any other company has to be included in this."

"There is a huge correlation in how many people can have Facebook on the Internet…," says telecom analyst Kunal Bajaj.

He also said Facebook and the other partners would "absolutely" gain out of this but, "there is nothing wrong with it. There is no guarantee that they will use a Samsung handset with a Qualcomm chipset."

Zuckerberg also agreed to long-term benefits: "We are optimistic that by getting more people on the Internet, it will help Facebook in the long term, too."

Through the initiative, other partners also stand to gain. With more people accessing the Internet, it will help Samsung and Nokia to sell more smartphones, Ericsson will be able to deploy more network equipment and telecom solution, Qualcomm and MediaTek will get mobile makers to buy more chipsets and Opera Software will be the preferred browser on these phones.

Internet.org was launched last year in August. A year later, a partnership was done with Sunil Bharti Mittal-promoted Airtel in Zambia in Africa, to offer free basic services like Facebook, Google search, Wikipedia, weather, among others.

The Facebook founder also said last year through the initiative three million people got connected, but then there is another two-third of the world which is still not connected.

Zuckerberg will also meet Prime Minister Narendra Modi to discuss how Facebook can help in digitising India, a subject which is close to Modi's heart.