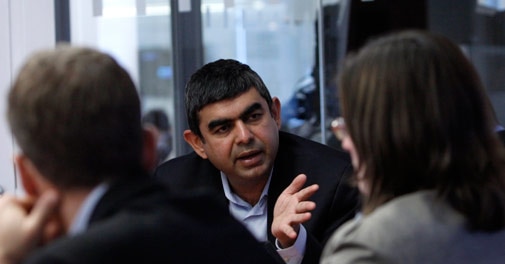 A month ahead of taking over as Infosys CEO, Vishal Sikka has hinted at "transformation" to bring back the lost glory to the over $8 billion entity.

Prepped to assume the new role, Sikka in a blog post on Monday said a company's "transformation" is about processes and people.

Sikka, who will succeed Infosys co-founder and current CEO SD Shibulal in August this year, will be the first non-founder chief and an outsider to take the top job at the Bangalore-based company.

His ascend to the top job comes at a time when the one IT bellwether company has lost its sheen due to lacklustre performance, while rivals like TCS and HCL Technologies have posted stellar results. As of March, 2014, Infosys revenue was Rs 11,360 crore for March quarter.

Reminiscing his journey from leading products at German software giant SAP to Infosys, Sikka said a "great transition that must follow my little transition".

"The last eight weeks have been surreal, a blur. From running all of SAP's products to being appointed the next CEO of Infosys, I've been through two extraordinary transitions within a period of time that feels like an instant," he said.

Sikka, who looked prepared for his next assignment, said: "As I write this, I am looking forward to taking leadership responsibility on August 1, and looking forward to a great transition that must follow my little transition. A great transition and its set of challenges and opportunities that await my new company, as well as every company in our industry, and indeed as software reshapes the world around us, every company in the world."

Sikka said he has been through two "transitions" in the last eight weeks, which have been "surreal".

"I've been through two extraordinary transitions within a period of time that feels like an instant. And at the same time, these two transitions happened amid the backdrop of much bigger transitions and transformations, that organisations go through, from companies to countries," he added.

Transformations they must go through, to survive, to continue to be relevant, when the circumstances and contexts around them change dramatically, Sikka said.

Fining similarities between his journey and India's (the country has voted Narendra Modi-led BJP to power in May) Sikka said his homeland has also witnessed a transition.

"And at the same time, my maternal homeland India has just seen a great transition of its own, and more than a billion citizens find themselves hopeful and looking ahead to a great transformation under a new transformative leadership," Sikka noted.