IT hiring may fall 20% this year: Nasscom

Last June, the IT industry body had predicted that the $143-billion domestic software industry might hire 2.75 lakh in 2016-17, up from about 2.3 lakh during last fiscal. 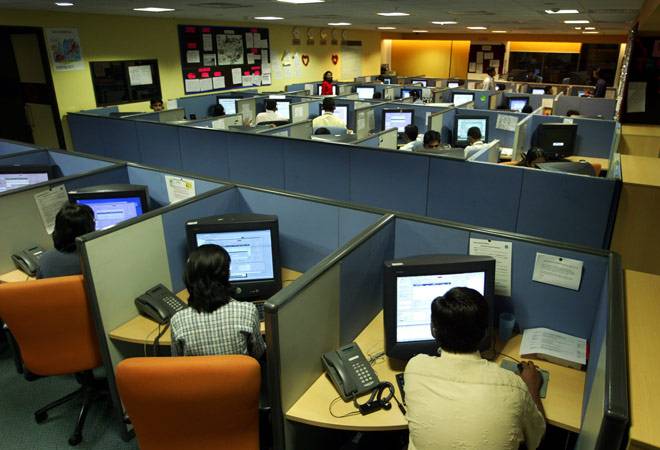 IT industry will see 20 per cent less recruitments this year, as major players like TCS and Infosys are focusing on more automation, thus hiring lesser number of people, according to Nasscom.

Last June, the IT industry body had predicted that the $143-billion domestic software industry might hire 2.75 lakh in 2016-17, up from about 2.3 lakh during last fiscal.

According to Nasscom chairman CP Gurnani, who is also the chief executive of TechMahindra, the drop in recruitment would not impact the revenue growth which is pegged at 10-11 per cent in the current financial year.

"I think we are still maintaining that overall industry will grow at 10-11 per cent this year... The hiring will not be as linier as we have seen in the past. The digital world leads to automation, automation leads to relatively lesser recruitments. Secondly, digital also means to get closer to the customer.

"I think you will see recruitments slowing down compared to last year. I think it will be like 15-20 per cent relatively lesser in headcounts. But it will not impact the revenues," Gurnani told PTI on the sidelines of 'Global In-house Centres Conclave' here.

A recent report by Mumbai-based Centrum Broking had said that the big five software exporters - TCS, Infosys, Wipro, HCL and Cognizant - together added net 24 per cent fewer employees in 2015 at 77,265, thanks to their automation drive.

The massive plunge in net additions was led by the Chennai-based Cognizant (down 74.6 per cent from 2014) and HCL (down 71 per cent) which have been very keenly focusing on improving utilisation rates through automation, Centrum said.

"Software vendors across the pack are focusing on automation and we believe that 2015-16 will be an inflection point. The result is that these five companies have net added 24 per cent fewer employees in 2015," the report noted, adding this came at a time when these companies' combined dollar revenue grew 9.8 per cent.

TCS had earlier this week announced that it too would be hiring less number of freshers.

During the fourth quarter, TCS had added only 22,576 to take its total workforce to over 3.53 lakh, but chief executive N Chandrasekaran said the gross hiring in this fiscal will be "much lower" than 90,000 in 2015-16 on lowering attrition, better productivity and deepening automation drive.

Also, the attrition levels are stabilising for the players with TCS saying it has come down to 14.7 per cent at the end of the fiscal, better than its immediate rival Infosys which had also reported an improvement, still at a higher 17 per cent.

TCS expects up to 32,000 freshers to join its benches from the 45,000 offers made at campuses across the country.

Infosys had said last week that in the March quarter, its total headcount stood at 1,94,044, up from 1,76,187 a year ago. Net additions in the quarter stood at 661 people. But the company did not reveal its hiring plans.

Replying to a query, Gurnani said the falling oil prices may have some impact on the domestic IT industry as the oil-dependent economies are reeling under pressure. But he was quick to say that the impact would be minimal.

"If I look at my member companies, and our global innovation centres, very few of them are from West Asia, while about 60 per cent of our revenue comes from America, and 25 per cent from Europe. So I think the impact will be minimal," Gurnani said.

On the impact of US elections outcome, Gurnani said some of the US senators should answer if they need India more or India needs US more.

"I think we need each other. There will not be much impact (of US elections on our IT industry)," he said.