Code on Social Security 2019: Sharp division among trade unions over benefits to workers

While the RSS-affiliated BMS is satisfied with the Code for accepting many of its demands, the Left-affiliated CITU sees a paradigm shift with the power to formulate substantive provisions for social security being handed over to executive - thus, removing democratic and participatory content in legislations 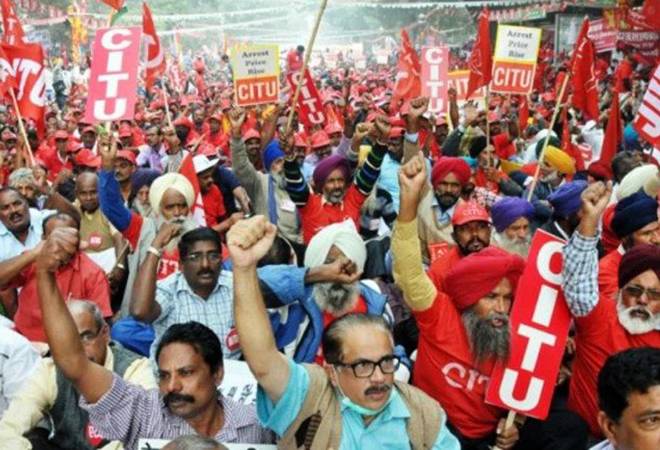 The Code of Social Security 2019, the last in the series of four labour reforms being ushered in, was introduced in the Lok Sabha on Wednesday. Only one of the three, the Code on Wages 2019 (others being the Industrial Relations Code 2019 and Occupational Safety, Health and Working Conditions Code 2019) has so far been passed by the Parliament.

This Code seeks to extend social security and benefits to unorganised sector workers, including gig workers, (online) platform workers, inter-state migrants and home-based and domestic workers as well as fix-term employees. It seeks to remove multiplicity of definitions and authorities relating to such matters for their effective implementations.

What the Code provides for

Some of the key features the Code lists are as follows:-

(i) Extends coverage of ESI to all establishments employing 10 or more people; provide for this coverage to those employing less than 10 on a "voluntary basis"; make it "option basis" for plantations and empower the central government to extend it any hazardous occupation irrespective of the number of workers;

(iii) Allows differential rates of employees' contribution to the provident fund for a specific period as the central government may notify;

(iv) Makes money dues to the employees to be a charge on the assets of the employer to be paid on priority as per the Insolvency and Bankruptcy Code of 2016;

(v) Central government to frame social security schemes for gig workers and (online) platform workers (like those in Ola, Uber and Zomato) and set up a social security fund for them or for any such class of workers;

(vi) Gratuity for fix-term employment even if the contract is for less than five years; maternity benefit to women employees; compensation for accidents while commuting to and fro place or work;

(ix) Re-designates Inspector as Inspector-cum-Facilitator and enhance his power to supply information and give advice for complying with this Code.

Trade unions are a divided lot on the Code's benefits

While the RSS-affiliated Bharatiya Mazdoor Sangh (BMS) is satisfied with the Code saying that most of its suggestions have been incorporated, the Left-affiliated Centre of Indian Trade Unions (CITU) has serious objections to the manner in which legislative power to formulate substantive provisions has now shifted to the executive domain.

CK Sajinarayanan, BMS's president, counts many good things in the Code, like withdrawal of earlier provisions in the draft code which allowed establishments to (a) opt out of the government-run ESI scheme to private health insurances and (b) shift from compulsory EPF scheme to voluntary National Pension Scheme (NPS). So is the case with (c) retaining the staff and funds under the PF and ESI laws separately (d) registration of unorganised sector workers through "facilitation centres" for providing social security benefits, instead of relying on labour department and (e) inclusion of gig workers, platform workers, inter-state migrant workers, home-based and domestic workers in the unorganised sector for coverage under the Code.

He draws particular attention to the provision which says "every establishment to which this Code applies shall be registered within such time and in such manner as maybe prescribed by the Central Government", saying that this would formalise the informal sector.

His only concern is lack of universal character of the Code since the existing thresholds for applicability of PF, ESI, gratuity, maternity benefits etc. have not been removed.

On the other hand, Tapan Sen, CITU's general secretary, says a paradigm change is being made by removing democratically participatory content of legislations by stipulating "as may be prescribed" or "maybe framed" in respect of almost all substantive provisions relating to entitlements, contributions and benefits in the Code. This means any future change in many substantive provisions of the Code could be made through executive decisions by bypassing the Parliament and other stakeholders. He counts 128 such instances in the Code.

For example, he says, while the Code aims to provide social security to unorganised sector workers "no concrete scheme" has been spelt out. The relevant provision reads: "The Central Government shall formulate and notify, from time to time, suitable welfare schemes for unorganised workers....on matters relating to life and disability cover, health and maternity benefits, old age protection, education, housing and any other benefits as may be determined by the Central Government."

He mentions several good social security schemes for workers in industries like beedi making, mining etc., providing robust health, education and other benefits and also having legal backing, which have now become redundant. While those workers stare at an uncertain future, the Code provides no concrete sector-specific schemes or dedicated funds to fill the vacuum. He seeks restoration of several sector-specific cesses which were withdrawn in 2016 and 2017 (except the one for building workers) to provide dedicated funds and run the existing welfare schemes.

Sen also objects to repelling of laws governing PF and ESI which are governed by tripartite committees (employer, employee and government) without fully incorporating substantive provisions in those laws. "There is no reason for merging or taking away well-functioning bodies under these laws. Rather, their functioning should be strengthened", he adds.

The industry has been supportive of the government's move to provide social security to the unorganised sector workers through the new Code with CII's MS Unnikrishnan, who heads its panel on industrial relations, observing that such a move would help to prevent their exploitation across the country.