The drugs and pharmaceuticals industry saw an improvement in the number of projects completed in 2015/16. A total of 26 projects were commissioned during the year. The drugs and pharmaceuticals industry saw an improvement in the number of projects completed in 2015/16. A total of 26 projects were commissioned during the year. Cost details of 19 projects were available, which amounted to Rs 2,310 crore. The industry had shown a slowdown in project completions during the three years ended March 2015.

Details of some of the major projects commissioned during 2015/16 are as below:

Laurus Labs invested a total of Rs 200 crore towards expanding its API manufacturing unit at Visakhapatnam. On completion in April 2015, the capacity increased to 1.4 million litres from 0.8 million litres.

Ipca Laboratories invested Rs 300 crore towards commissioning its plant to produce bulk drug & drug intermediates in Ranu, Vadodara. This unit will have the capacity of 223.7 tons per month. It was completed in June 2015. 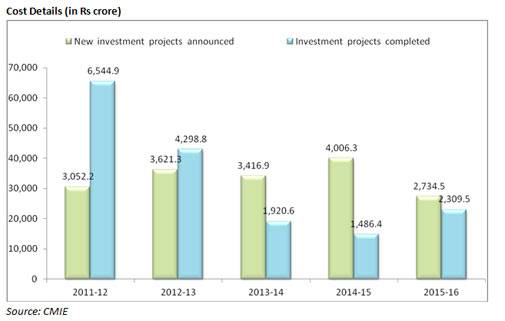 Indian Immunologicals set up a facility to manufacture animal & human vaccines at Phase-III of Genome Valley in Karkapatla. The plant is equipped to manufacture 300 million tablets, 100 million bolus and 20 million vials of injectables. With an investment of Rs 250 crore, the project came on stream in October 2015. It is built over 47 acres.

Torrent Pharmaceuticals invested a sum of Rs 650 crore to set up a formulation and active pharmaceutical ingredients (API) manufacturing plant (Phase-I). This plant is situated in Dahej SEZ, spread across 70 acres. On completion of Phase-I, the plant's installed capacity stood at 7,500 million tablets/capsules and 25 million tons (MT) of API per annum. The plant will cater to international regulated markets such as US, Brazil, Germany, etc for which the company has already received approvals from the respective regulatory bodies. It was completed in November 2015.