Resolving equipment issues may be easier to address for the Narendra Modi government than other problems such as difficulties pushing through land acquisition, delays in getting environmental clearances and lack of transport facilities. 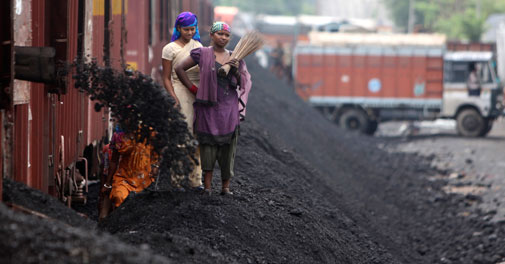 (Photo for representation only. Source: AP)

As Prime Minister Narendra Modi's government looks to shape up Coal India for a potential major restructuring, the world's biggest coal miner still faces basic problems: it does not have enough mechanical shovels, dumpers and explosives.

The government, which has a 90 per cent stake in the company whose total market value is about $40 billion, is exploring a break up and opening up the sector to foreign investment to boost output and cut imports, sources have said.

But the firm, which accounts for more than 80 per cent of India's production and employs 350,000, has not met its output target for years, ensuring the country remains the world's third-largest coal importer despite sitting on huge reserves.

A failure to boost efficiency could threaten long-run plans to spin off some of the seven units of the coal miner, a vital part of the government's reform strategy.

Two units produced less in the last fiscal year than a year ago, partly due to lack of basic equipment and ageing machinery, Power and Coal Minister Piyush Goyal told Parliament this week.

The minister did not provide data but according to a top official at one Coal India unit this issue could be cutting Coal India's annual output by more than 10 per cent. The official declined to be identified due to its policy on talking to media.

Coal India spokesman Vijay Sagar said it was difficult to assess how much production was affected due to shortages of equipment or explosives. The latter is in short supply mainly due to a restriction on moving chemicals such as ammonium nitrate to prevent it from being misused by extremists.

Nonetheless, resolving equipment issues may be easier to address than other problems such as difficulties pushing through land acquisition, delays in getting environmental clearances and lack of transport facilities.

Coal India produced 462 million tonnes in the last fiscal year, against a target of 482 million.

Experts said a shortage of mechanical shovels and dumpers, used in open cast mining, was partly due to Coal India's procurement policy that forces it to issue a tender for every big purchase, even for spare parts.

Coal India's Sagar said though procurement of big equipment may take time things had improved in the past three years after the appointment of an external monitor to oversee purchases.

In late 2011, some Coal India officials were charged for corruption over equipment tenders, leading to heightened scrutiny of the procurement process.

Coal India's productivity, in output-per-man each shift, was 4.92 tonnes in 2011-12, below a target of 5.54, according to the last available Planning Commission figures. The global average is about three times of that.

Productivity in underground mining is less than one tonne. About a tenth of India's underground output is loaded by workers, according to the planning commission, which has asked for it to be fully mechanised by 2017.

In addition, the number of hours a shovel would run would be around 22 hours a day in the private sector, but just 15 hours in a public sector firm like Coal India, according to experts.

Minister Goyal said there was scope to improve mechanization in underground mining and that Coal India was looking at a consultancy's recommendations on technology and modernising mines.