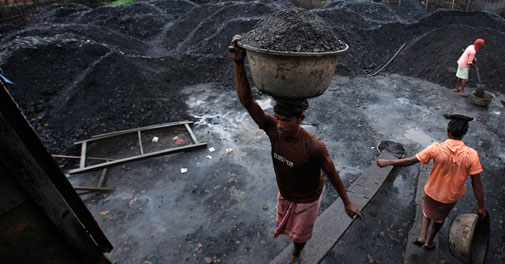 According to a filing on the Bombay Stock Exchange (BSE), the PSU also missed its offtake target of 41.55 MT during the month, registering an actual offtake of 35.51 MT in in October.

No reasons were given by the company for missing both the targets.

Last month, a Coal India official had said the PSU suffered a production loss in October due to Cyclone Phailin, which affected the key coal producing states of Odisha, Jharkhand and West Bengal.

The loss came amid the firm drawing flak from all quarters for missing its production target.

Coal Minister Sriprakash Jaiswal had earlier said though production at CIL has been hit in October due to Cyclone Phailin, "we are hopeful that (Coal India) will achieve its production target for the current fiscal."

Against the output target of 247.45 MT in the first seven months of the current financial year, CIL produced 235.51 MT of coal, the filing said. The company's offtake from April-October was 259.87 MT while the target was 268.78 MT, it added.

CIL, which accounts for over 80 per cent of the domestic production, contributed 452.5 MT of coal in the previous financial year compared with the target of 464 MT.

'UK visa bond scheme was not targeted at India'