Many of India's leading public sector firms are running into huge losses on their books as government destroys its own assets with merciless indifference, allowing policy drift to undermine what were once considered its crown jewels.

Christened as Navratnas because of their towering economic strength, many of India's leading public sector firms have now been run into the ground with huge losses on their books. The government has destroyed its own assets with merciless indifference, allowing policy drift to undermine what were once considered its crown jewels.

Successive governments and ministers have delivered blow after body blow to these companies. But the last seven years of UPA have seen them hurtling from one crisis to another.

According to panchayati raj and tribal affairs minister and former chairman of the high-powered committee on public undertakings Kishore Chandra Deo, the ill-fated shotgun wedding scripted by former civil aviation minister Praful Patel in 2007 between Indian Airlines and Air India is responsible for the state carrier lying on its death bed.

Similarly, two successive DMK ministers, Dayanidhi Maran and A. Raja, oversaw the demise of the telecom twins - Bharat Sanchar Nigam Ltd (BSNL) and Mahanagar Telephone Nigam Ltd (MTNL). Not only did they choose not to effect a merger of BSNL and MTNL, they ignored the harsh reality of shoring up the business by not building network capacities. Constant re-tendering and ill-timed 3G and broadband wireless bandwidth acquisitions have resulted in a massive erosion of their net worth. 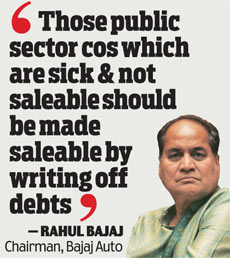 Over the past year, MTNL's stock has more than halved to Rs 26. Its second quarter results for the period ending September are in shambles as the net loss of Rs 864 crore is more than the company's turnover of Rs 861 crore. 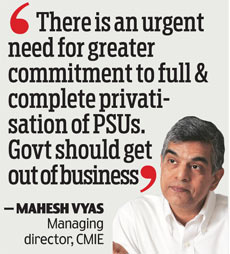 The woes of the oil marketing companies (OMC) are a classic case of ad hocism. The blame rests squarely with the UPA government, which dropped the idea of deregulation of petroleum prices. Between UPA oil ministers Mani Shankar Aiyar, Murli Deora and S. Jaipal Reddy, healthy OMCs have been wheeled into the sick bay.

With a July-September 2011 gross turnover of Rs 93,868 crore Indian Oil Corp (IOC) is in the throes of a crisis. Its net loss for the second quarter of 2011-12 stands at Rs 7,486 crore. Similarly, Hindustan Petroleum Corp Ltd (HPCL) has reported a net loss of Rs 3,364 crore, while Bharat Petroleum Corp Ltd (BPCL) has posted a loss of Rs 3,229 crore for the same period.

It's the same story across other public sector undertakings (PSUs). The government needs to pay for their cumulative sins. Coal India is beset with corruption and scandals. Coal minister Sriprakash Jaiswal said, "Yes, there is rampant corruption in Coal India.

But I have cracked down on it." The asset quality across State Bank of India's (SBI) loan portfolio is also worsening. There has been a surge of bad assets to 2.04 per cent and the bank is looking for a fresh cash infusion from the government.

Uninor to bid for 2G spectrum