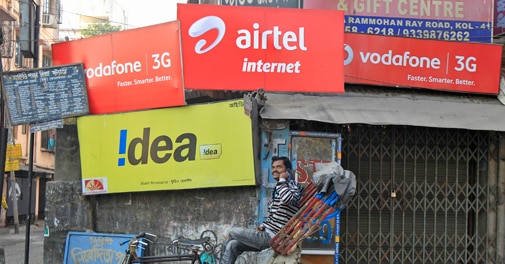 Bids worth Rs 54,600 crore were offered by telecom companies on the fifth day of the ongoing spectrum auction with Delhi witnessing aggressive bidding for both 900 Mhz and 1800 MHz bands.

Telecom Secretary MF Farooqui said on Friday the total value of the bids was Rs 54,600 crore after 35 rounds of bidding. "Activity is on in eight service areas. Bidding will continue tomorrow morning," he added.

At the end of the fourth day on Thursday, telecom companies had jointly made bids worth about Rs 52,689 crore.

The auction of the two bands, which have been used by 2G operators so far, has received a strong response. The auction in November 2012 lasted for 2 days and March auction last year lasted only one day.

In November 2012, bids worth Rs 9,407 crore were received for spectrum worth Rs 28,000 on offer. In March 2013, no GSM operator bid at the auction and only CDMA operator Sistema Shyam bought spectrum for about Rs 3,600 crore in eight of the 21 service areas.

There is no time limit for the sale of spectrum and the duration of the current auction will depend on the appetite of the eight companies in the fray - Bharti Airtel, Vodafone, Idea Cellular, Reliance Jio Infocomm, Aircel, Tata Teleservices, Telewings (Uninor) and Reliance Communications.

At the end of each bidding round, the price of radiowaves is increased in the range of 1 to 10 per cent, depending on the number of spectrum blocks in demand.

The government has put on the block about 385 megahertz of spectrum in the 1800 Mhz band. The auction started on February 3, following the cancellation of 122 licences by the Supreme Court in the 2G spectrum allocation case.

The government is also auctioning radiowaves in the 900 Mhz band in Delhi, Mumbai and Kolkata, which are held by Vodafone, Airtel and Loop Mobile, as their licences are expiring in November.

Banks may use part of buffer provisioning for NPAs