The total wireless subscriber base increased to 1,151.8 million in October from 1,148.6 million in September, registering a monthly growth rate of 0.3 per cent That said, Airtel has added 13.6 million new mobile subscribers while Jio settled with a gain of only 9.1 million new subscribers between July and October 2020. Further, Airtel managed to lead with a gap of 1 million in net additions in August which increased to 2.3 million in September, although, the difference reduced to 1.4 million in October. Eventually, its market share, in term of wireless subscribers, inched up by 56 basis points during this period.

On the other hand, continuing the downward spiral, Vodafone Idea lost 2.7 million subscribers during the month while BSNL lost 10,208 users and MTNL lost 7,307 users, respectively, according to the latest TRAI data. 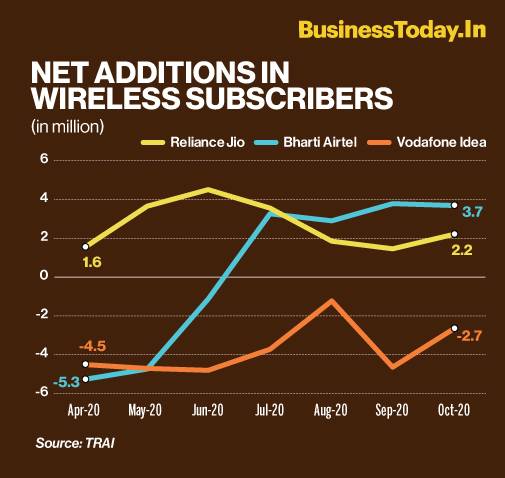 The total wireless subscriber base increased to 1,151.8 million in October from 1,148.6 million in September, registering a monthly growth rate of 0.3 per cent. Wireless subscription in urban areas increased from 626.2 million to 629.3 million while in the rural areas it rose from 522.4 million to 522.53 million, during the said period. Monthly growth rates of urban and rural subscription were 0.5 per cent and 0.02 per cent, respectively, during the month, the TRAI data revealed.