"I have no doubt that Jio and Jio-enabled Indians will create a whole new digital economy, and we will witness a period of unprecedented growth, empowerment, employment and prosperity for our nation," RIL chairman Mukesh Ambani said. 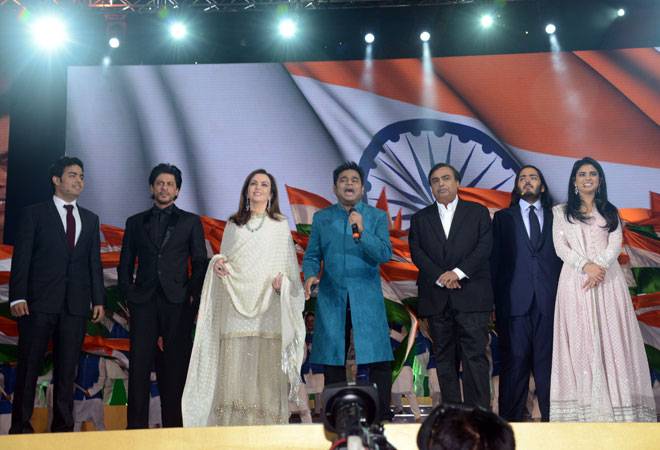 "When it comes to India, I am an eternal optimist. I have no doubt that Jio and Jio-enabled Indians will create a whole new digital economy, and we will witness a period of unprecedented growth, empowerment, employment and prosperity for our nation," he said.

The launch was anchored by Ambani sibilings-Isha and Akash-along with bollywood star Shah Rukh Khan. Ambani's mother Kokilaben and wife Nita were among the audience of 35,000 Reliance employees and families and celebrities. Jio's service has been started for the employees.

He also said that India's internet and mobile broadband penetration will shoot up, taking the country to top 10 from the present 150th position now. India has the youngest population in the world and if they get tools, skills and environment, they will surprise us, added.

Jio has spent nearly Rs 80,000 crore for the spectrum, towers, optical fibre and content before the soft launch. Immediate turnaround is not their focus, but need to lure a large crowd of consumers to their network. For that the 4G device cost should be low; cost of the service should be affordable; and the quality of the service should superior.

The low-cost 4G handsets have started coming to Indian market, mainly from China. The handsets available for the employees under the brand LYF ranges from Rs 15,000 to Rs 25,000. The expectation is that by the time of commercial launch by March 2016, the Rs 4,000 handset will come to the market. Jio applications are free with the device.

The Chinese manufacturers have already brought down prices to below Rs 10,000. Lenovo has recently introduced 4G phone (A2010) at around Rs 4,500 and Xiomi Redmi Note is on offer for Rs 8,999. However, Jio looks to launch exclusive devices for selling it through its digital stores, which comes under Reliance Retail.

"The combination of Jio's strong initiatives and a supportive global environment gives me the confidence that we will see 4G LTE smartphones in India at prices below Rs 4,000 by December of this year," said Ambani at the annual general meeting of Reliance Industries.

"We are here to challenge the conventional wisdom. It took time to think differently. We are doing something extraordinary. There will be challenges on the way. Industry changed, people and the government. We are at the last lap of marathon," says a Reliance executive.

4G is just an enabler - albeit a very powerful one - and it's up to operators to market and price 4G services effectively to drive uptake of mobile broadband services. If operators get it right, then 4G can bring about major changes in the way consumers use the Internet, says Paul Lambert, senior analyst at research firm Ovum.