Reliance Jio's gross subscriber base increased by 4.7 million to reach 388 million, while Bharti Airtel saw loss of 1.3 million subs after five months of continuous increase in number of subscribers Telecom Regulatory Authority of India (TRAI)'s recently released subscriber data for the month of March gave glimpses into the lockdown impact as the industry lost around 2.9 million gross subscribers during the month to reach a total subscriber base of approximately 1,178 million (both wire & wireless). This was in contrast to the gross addition of 8.4 million subscribers in the previous two months with around 4-5 million monthly subscriber additions in both January and February this year. The decline was possibly on account of the nationwide lockdown measures and rise in tariff plans. Overall, there was a net decline of 5.5 million gross subscribers in FY20. 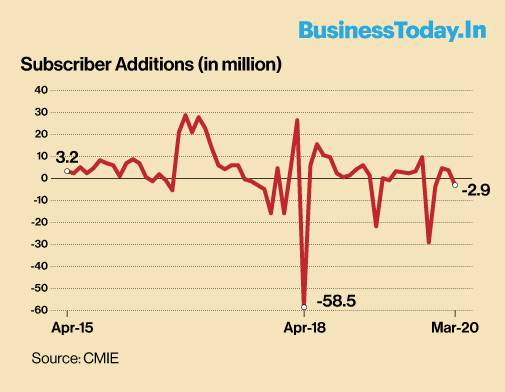 Total wireless subscribers (2G, 3G and 4G) decreased from 1,160.6 million at the end of February to 1,157.8 million in the following month, registering a monthly decline rate of 0.24 per cent. Wireless subscription in urban areas decreased from 643.24 million to 638.48 million while in rural areas it increased from 517.34 million to 519.27 million, during this period. This translated into monthly growth rates of negative - 0.74 per cent and 0.37 per cent, respectively, for the urban and rural areas.