India must aim higher than $5 trillion. The most important thing is to improve the ICT infrastructure because 5G will not only support another G but also other verticals, said Arogyaswami Paulraj 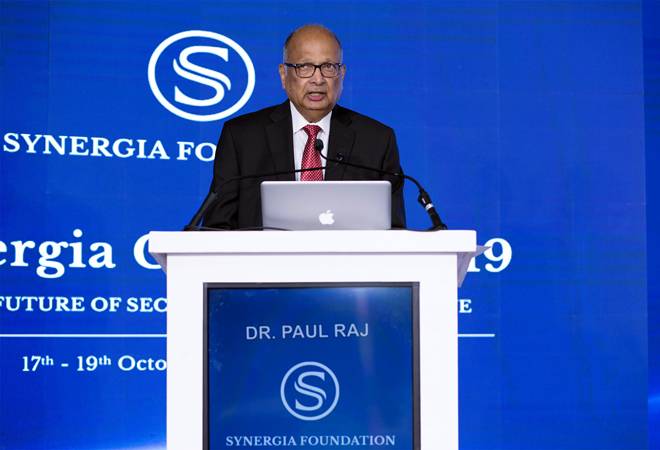 Professor Emeritus Arogyaswami Paulraj, Stanford University, a pioneer of MIMO wireless communications, Padma Bhushan awardee feels that telcos will have to look at new business models to sustain once 5G becomes a reality.

India's debt laden telecom sector is staring at a new challenge - the adoption of 5G technology. Undoubtedly, it can be a game changer in the national growth story, but currently the tariff and data war among telecom companies are taking an ugly turn with increased capex and high spectrum costs pushing the telcos to the brink. Professor Emeritus Arogyaswami Paulraj, Stanford University, a pioneer of MIMO wireless communications, Padma Bhushan awardee and winner of several other awards feels that telcos will have to look at new business models to sustain once 5G becomes a reality. Business Today met him last week at the Synergia conclave to discuss where India stands on the 5G curve.

Business Today: What are your views on the current tariff war among Indian carriers and sustainability of a debt ridden sector?

Arogyaswami Paulraj: I believe countries need a competitive ecosystem of two-three companies where all of them are viable. Monopoly is never in nation's interest. I expect the government to ensure that there is effective competition in this space.

How do you view the commercial viability of 5G?

Paulraj: 5G has new dimensions to it. It's not just another G like its earlier versions. 5G will have a broader application . With many more verticals that 5G may bring upon, it is unclear whether the current carrier model of public networks that Vodafone, Bharti Airtel and Reliance Jio run is a right model. We need to look at it differently. The 5G may not scale properly with existing models. That is the issue. It will require new type of services and business models. What will work is still a big question mark, though.

How far away is India in the adoption of 5G?

Paulraj: The first thing that India should do is to allocate the spectrum. While many countries have done it, the cost is still a hindrance in India. High costs are not viable since wireless services bring a huge value to the country. While it is  in the government's interest to facilitate enabled services, monetisation of spectrum (a legitimate interest of the government) poses a conflict. The question is whether to extract all the money out of the system and  bankrupt the industry or find an alternate. I keep telling the government that it is not merely a taxation opportunity but an opportunity to serve the people. With commercial viability and business model uncertainty I feel spectrum should be made as cheap as possible in the public interest.

We are seeing companies and device makers gearing up for 5G technology without the infrastructure being ready. Is the spend too ahead of the curve?

Paulraj: The question is whether infrastructure should be ready first or the devices. In the implementation of 4G, we had the infrastructure first and mobile devices lagged. It's wise that infra comes first and devices track that since enormous cost is involved in developing devices. I don't see it happening in the 5G space in India. The country is yet to take the first step by getting auctions out. With 5G being so different from earlier ones, we have recommended trails and used cases by different verticals  to understand the implications better and accordingly move ahead .

What should be done to realise the dream of being a $5 trillion economy?

Paulraj: India must aim higher than $5 trillion. The most important thing is to improve the ICT infrastructure because 5G will not only support another G but also other verticals. Hence, it will be critical in realising the ambitious goal. I think 5G should be a national priority for us.