Trai has asked DoT to give six months time to telecom companies for making suitable changes in their networks from the date the full MNP is approved. Trai, headed by Rahul Khullar, has said that the two MNP service providers must not be charged more for extending nationwide MNP and charges related to entry fees.

The government plans to roll out nationwide mobile number portability (MNP) by early next year as the Telecom Regulatory Authority of India (Trai) has recommended not to introduce any new MNP licence. The regulator has instead suggested allowing the two old licencees that currently extend MNP services to extend full nationwide MNP.

Trai said that the two MNP service providers must not be charged more for extending nationwide MNP and charges related to entry fees, FBG and PBG must be as per the existing licence conditions. The two service providers were given MNP licence in 2009.

The new Trai recommendation is a complete U-turn from its September 2013 suggestions on nationwide MNP when it said that the Department of Telecommunications (DoT) may carry out the necessary changes in the existing MNP service licence to facilitate inter-service area porting, or full MNP.

Justifying its recommendation, Trai said, "Entry fees is paid by a licencee when either it gets the licence for the first time or the validity of its licence expires. In the present case, full MNP is proposed to be introduced due to a unilateral policy decision taken by the government after entering into an agreement with the present MNP licencees. The existing MNP service providers still have around five years of their licence period left." 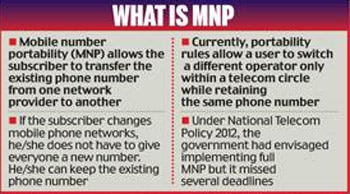 Trai while defending its point stated that potential subscribers using full MNP facility would be very small as compared to the intra-circle porting being offered currently.

"However, full MNP will involve certain cost to MNP service providers due to changes required in the software and modifications in the existing process. In addition, inter-operator and acceptance testing also involve manpower and testing fees. So, the Authority is of the opinion that there seems no justification for any enhancement of entry fees for MNP licencees," it said adding that FBG and PBG conditions must be as per the existing MNP licence conditions.

Trai has asked DoT to give six months time to telecom companies for making suitable changes in their networks from the date the full MNP is approved.

Top DoT officials said that they would soon take a call on full MNP and expect to clear it soon.

"We don't have to go through issuing another licence for full MNP services. As the current MNP providers will expand their scope of work to offer full nationwide MNP services, this must not take much time. We may be able to introduce nationwide MNP in next seven to eight months," a DoT official said.