The company also posted an annual drop of 16 per cent in revenue to Rs 754 crore. However, Uninor said the drop is because last year, in the September quarter, Uninor operated in nine circles. 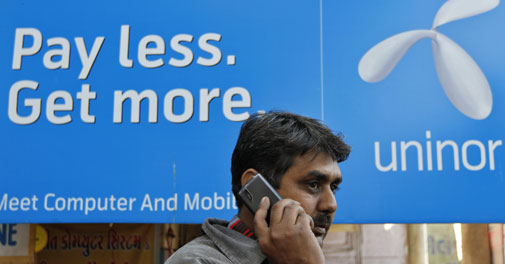 Uninor, the India arm of Nowegian telecom giant Telenor, saw a quarter-over-quarter increase in operating loss by 33.6 per cent to NOK 143 (Rs 148 crore) in the September quarter, due to its investments in expanding coverage in the six circles where it is present. The previous quarter it had reported an operating loss of NOK 107 (Rs 110.7 crore).

The company absorbed the operational and capital expense in the current quarter's financials. "Uninor expanded its coverage with 870 sites in quarter-2 and the additional costs on this account have not only been absorbed but we also expect to see revenue contribution from these sites to become visible in quarter-4," said Prasoon Sinha, Chief Financial Officer of Uninor in an email statement.

In the past, Uninor CEO Yogesh Malik has said the company will break-even by the end of 2013 and its Telenor Group's third quarter presentation sticks to that promise.

The company also posted an annual drop of 16 per cent in revenue to Rs 754 crore. However, Uninor said the drop is because last year, in the September quarter, Uninor operated in nine circles. "Revenue grew by 23 per cent in (in the six circles) as compared to the previous quarter last year," said Sinha.

The company has reduced its losses substantially compared to the same quarter last year by 73.4 per cent from (NOK 536) on account of operational restructuring and pointed focus in the circles it operates in. It has also been able to get a higher chunk of the rural customers because of its focus at the block level. Uninor's rural subscriber growth was 1.08 per cent second only after Idea Cellular's, according to Cellular Operators Association of India's recent report.

Uninor, which claims to offer the most affordable or the cheapest tariff, increased its subscriber base by 6 per cent to 26 million sequentially. "Uninor is steadily gaining revenue and subscriber marketshare in its six operating circles on account of most affordable among all tariffs and good quality network in the areas we are present in," says Sinha.

Going forward, Sinha says the company expects more revenue coming from the expansion it has done in September quarter. It is also increasingly focusing on data, again by being the most affordable data tariff provider in second generation and EDGE network.

Ford India sales up 36% in October