Google Argentina's website was down in the country for a couple of hours one night. Surprisingly enough, the domain was also put up for purchase at the time. Google is the biggest search engine in the world and its country-specific domains follow the lead in almost every nation. Google Argentina is no different and you would think that would make its web domain exclusive for all purposes. For a few minutes though, that wasn't the case.

That is because Google Argentina's domain name was bought by an individual last Wednesday. Now before you start wondering how that could possibly have happened, know that the website was down for two hours in the country on the night.

The epic sale was made by a 30-year-old web designer named Nicolas Kurona. Kurona shared an image of the purchase on his Twitter account, quickly gathering a massive number of reactions from the Twitterati.

After all, it is not every day that an individual gets to claim Google's web domain. What's more, Kurona mentioned that he purchased the domain - Google.com.ar through a normal, legal process. So what happened here? 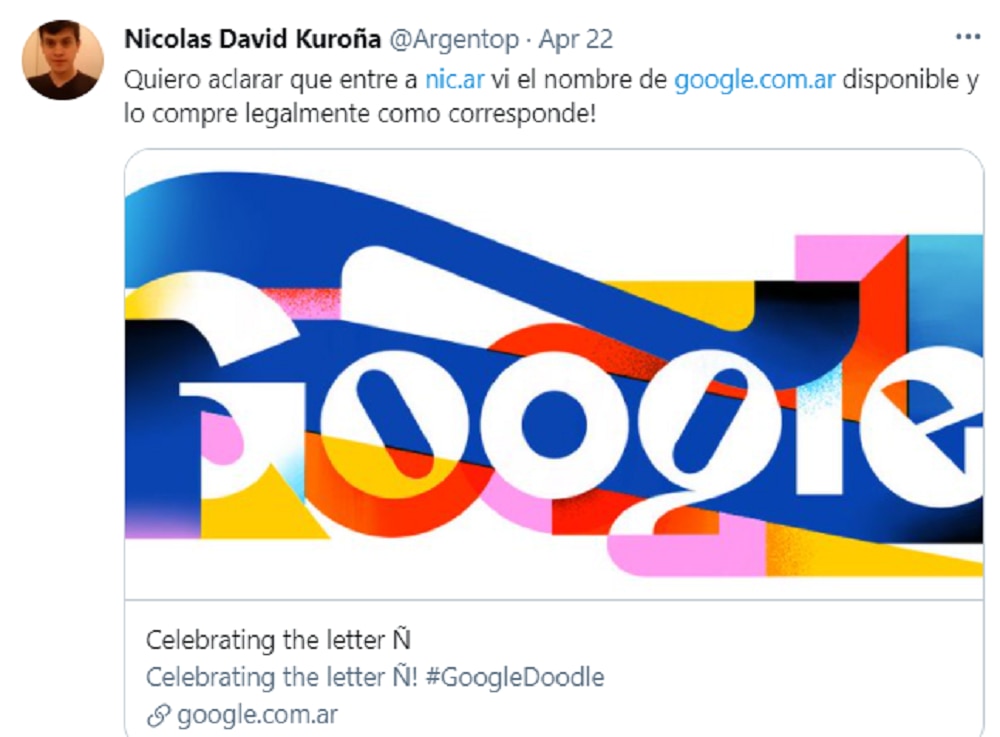 Google's Argentina domain was down for around two hours in the country on Wednesday. Kurona, outskirts of Buenos Aires on Wednesday night, designing a website for a client, got to know about this through some messages on his WhatsApp.

That is when he decided to check it himself. "I entered www.google.com.ar into my browser and it didn't work," he said, in an interaction with BBC. "I thought something strange was happening."

Kurona then made a rather heroic attempt. He looked for the website's domain on the Network Information Center Argentina (NIC). NIC is responsible for operating all the country code domains for Argentina with .ar.

To his, and now to the surprise of all of us, Google's Argentina domain was available for purchase. Nicolas acquired Google Argentina's domain name for 270 pesos (Rs 415).

"I was frozen," he said, having never imagined completing the transaction. To check its authenticity, he opened www.google.com.ar into his search bar and pressed enter. "My personal data appeared," he said.

Google Argentina confirmed the same to BBC, saying "for a short term, the domain was acquired by someone else." It, however, mentioned that it regained control of the domain very quickly.

Kurona confirmed that the domain name was taken away from him shortly by the NIC. But his 270 pesos have not been returned, either by the NIC or Google.

As to what caused this to happen is still a mystery. One speculation is that Google's domain name had expired but the company has refused that to be the case, and it has other sources backing it. Whatever might the reason be, Kurona was quick to grab hold of the situation and become an overnight sensation on Twitter.

Also read: | BigBasket user data allegedly leaked on dark web, including email IDs, numbers, addresses of over two crore Indians
Also read: | How to search for hospital beds, oxygen cylinders and other Covid 19 related resources near you on Twitter
Also read: | Twitter advanced search adds filters that can help with Covid related resources, here is how it works

Oppo K9 to come with Snapdragon 768G SoC, the official listing goes live ahead of May 6 launch