Airtel has announced a promotional offer wherein it will give free 1000GB additional data for six months. 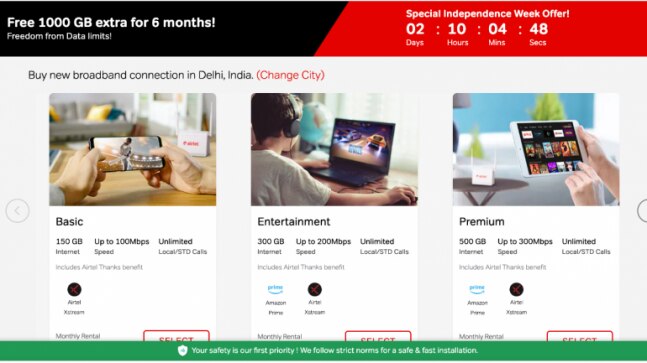 Airtel is giving free additional 1000GB data to the new subscribers of the Airtel Xstream Fiber Home Broadband plan. Airtel has rolled out the plan as an Independence Day offer for a promotional period. The plan can be availed at the purchase of a new Airtel Xstream Fiber Broadband connection. The validity for the additional 1000GB data is for six months. Users can avail this plan till August 16 midnight, as per Airtel's website.

The limited period offer applies to all Airtel Xstream Fiber plans and is available to customers across all top cities where Airtel provides Xstream Fiber broadband services.

Airtel Xstream Fibre offers ultra-fast broadband with speeds up to 1Gbps and serves the requirements of multiple connected devices in today's homes.

Users must note that the additional 1000GB offer is not applicable on unlimited data and prepaid broadband plans.

Users subscribing to entertainment, VIP, and Premium plans get the benefit of Amazon Prime subscriptions along with access to Airtel Xstream. All plans get unlimited local and STD call benefits.