Amazon has partnered with Airtel to launch Prime Video Mobile Edition (PVME) plans in India starting at Rs 89. Users can avail a free trial for the Amazon Prime Video mobile edition of 30 days through the Airtel Thanks app. 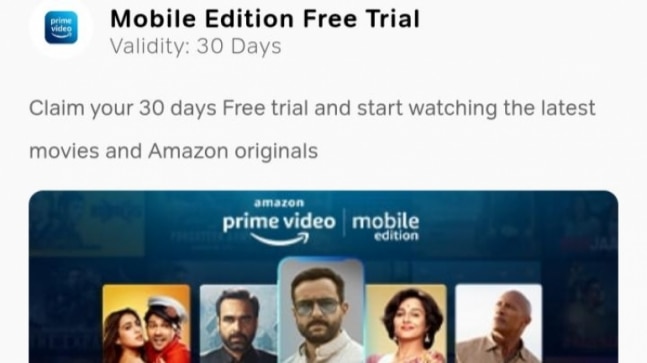 Amazon has partnered with Airtel to launch mobile edition plans in India starting at Rs 89. As of now, the mobile-only Amazon Prime video plan is exclusive to Airtel users and India is the first country where Amazon has launched its mobile-only edition plans. Now, Airtel users can redeem a 30-day free trial of Amazon Prime video mobile edition given that they have access to the Airtel Thanks app. However, if you are already a member of Amazon Prime or have subscribed to it separately, you will not be able to avail of this offer or will have to create a new account to redeem the offer.

Now, coming to the free trial period offer, Airtel users have to follow the given steps to get Amazon Prime free subscription.

-- Navigate to explore feed or keep scrolling till you see a card that reads Mobile Edition Free Trial.

-- You cannot be an active member of Amazon Prime to redeem the offer, so the next step will be to create a new account.

-- Once you have created the account, confirm the activation of the trial offer. You can access your subscription by downloading the Prime Video app.

Airtel, in its terms and conditions has noted that after users purchase the Amazon Prime mobile edition packs, users will get access to the entire catalogues of movies and shows on Amazon Prime video on their mobile device. The telco also notes that the video quality will be in SD and only by a single user.

Airtel has previously given benefits like a free subscription to YouTube Premium through the Thanks app. Aside from Amazon Prime, Netflix also has a mobile plan priced at Rs 129 per month. However, the plan is not tied up with any particular mobile company and can be accessed by anyone on their mobiles. Netflix had also given users access to free Netflix for two days as part of Netflix Streamfest which was also launched in India first.

ALSO READ: | Amazon-Airtel Prime Rs 89 mobile Plan: For Airtel users, unique to India and other key details you need to know
ALSO READ: | How to use Signal and ditch WhatsApp: here is your guide
ALSO READ: | Looking for data plans with streaming benefits under Rs 500? Consider these offers from Airtel, Jio and Vi

iOS 14.4 beta 2 released: All the changes in the latest beta and how to download