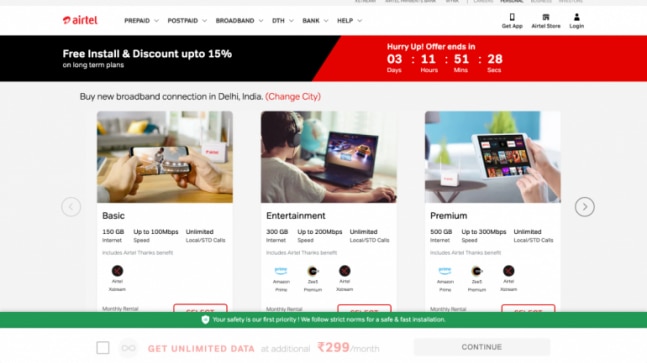 Airtel XStream users can get up to 15 per cent discount on their long-term broadband plans. At a time when most work is being managed from home by students and employees, these long-term plans could come in handy. These long-term plans which last from 6 months to a year gives speeds up to 1Gbps. Airtel XStream Fiber is also giving free installation to all new subscribers. The availablility of the discount was three days when this article was published.

Users signing up for 6 months get half the discount of annual plans, which is 7.5 per cent. Airtel has promised a faster installation for first-time users. The offers are available on all Xstream Fiber plans across the country.

Thus long term Airtel XStream subscribers get higher speeds and do not have to worry about recharging again and again as the validity is of a decent period. There are short-term plans being provided from Airtel XStream as well but they won't come with the discounted benefits. Let's take a look at these long-term plans that offer discount benefits to users.

Airtel XStream semi-annual or 6 month plans after 7.5 per cent discount:

Airtel XStream Basic Plan at Rs 4434: This plan offers 150GB data at 100 Mbps. After the discount, the plan comes down to Rs 739 as against Rs 799 per month making a total of Rs 4434 for six months. Users save Rs 360 if they subscribe to this plan. It comes with a free Airtel Xstream Subscription with other Airtel Thanks Benefits.

Airtel XStream Entertainment at Rs 5544: This plan offers 300GB data at 200 Mbps. After the discount, charge per month comes to be Rs 924 as against Rs 999. The six month charge comes at Rs 5544 saving its users Rs Rs 450. It comes with added benefits like Amazon Prime Video, Airtel Xstream Subscription with other Airtel Thanks Benefits.

Airtel VIP Plan at Rs 8319: This plan offers unlimited data at 1Gbps speed. The charge for this plan per month comes out to be Rs per 1387 as against Rs 3999 per month after the discount making the total plan for Rs 8319 saving users Rs Rs 22194.

For annual plans, the added benefits remain the same but users get a 15 per cent discount on subscriptions.

Airtel XStream Basic plan at Rs 8150: The Basic plan brings in the same benefits as the semi-annual plan. Users have to pay Rs 679 per month instead of Rs 799. The plan thus saves them Rs Rs 1,438.
Users subscribing to entertainment, VIP, and Premium plans get the benefit of Amazon Prime and Zee5 subscriptions along with access to Airtel Xstream.

Airtel XStream VIP plan at Rs 40,790: This plan offers users up to 1Gpbs speed. Its monthly charge comes down to Rs 3399. The VIP plan subscribers can save Rs 600 on the annual subscription saving users 7198.